When the ARCA/CRA Super Series, ARCA Midwest Tour and ARCA Gold Cup stars hit the track on Saturday afternoon, Dillner will be joined in the booth by popular short racing announcer Spencer Lewis and Matt Prieur, the voice of the Champions Racing Association (CRA).  51 TV pit road reporter Jana Wimmer will join the trio and will deliver all of the action from pit road.

The live pay-per-view broadcast will be headlined by a Super Late Model combination event featuring the ARCA/CRA Super Series and ARCA Midwest Tour in a 100-lap battle at Toledo.  Co-headlining the event on the live broadcast will be a 100-lap main event for the ARCA Royal Truck & Trailer Gold Cup Outlaw Late Models.

“This is an event that I’ve really been looking forward to broadcasting on 51 TV,” said Dillner.  “We’ve assembled a great team of on-air talent and the entire 51 TV team is excited for this weekend’s event in Toledo.  With three great series and two different styles of cars in action on the fast, half-mile Toledo oval, fans at home watching on 51 TV should be in for a treat.”

Lewis, who made his debut with 51 TV during the FansChoice.TV powered by Speed51.com broadcast of the World Series of Asphalt Stock Car Racing at New Smyrna Speedway, will make the trip down to Ohio from his home province of Ontario in order to join the team for this event.

“Toledo Speedway has always been a favorite of mine as a fan – and there are few tours on the planet that bring together elite level talent like the ARCA/CRA Super Series,” said Lewis.  “This event is a can’t miss for any short track fan and it’s an honor to have the chance to be a part of the show alongside the rest of the 51 TV team.”

Since the debut of 51 TV, Wimmer has quickly become one of the most familiar faces on pit road for those watching from home.  The event on Saturday afternoon will be her third event with 51 TV after joining the team during the live pay-per-view broadcasts of the Slinger Nationals and Snowball Derby in 2014.

“I am very excited to be part of 51 TV’s broadcast of the 7-Up Twin 100′s at Toledo Speedway,” said Wimmer.  “I have a lot of experience with the ARCA Midwest Tour and am looking forward to my first trip to Toledo Speedway and teaming up with 51 TV, Bob Dillner, Matt Prieur and Spencer Lewis to bring top notch Super Late Model coverage to fans across the country.”

51 TV’s signature broadcast style will feature a live, in-house broadcast team, multiple camera angles, a broadcast-style graphics package and more that will bring the fans unable to make it to Toledo, Ohio that much closer to the action.

The live 51 TV broadcast will kick off at 1 pm ET on Saturday, April 11 from Toledo Speedway with live coverage of qualifying for the ARCA/CRA Super Series and ARCA Midwest Tour Super Late Models as well as the ARCA Gold Cup Series Outlaw Late Models.  The live broadcast will continue with coverage of the Last-Chance races (if necessary) and into a pre-race show before 7-Up Twin 100′s feature racing action begins.

For more information on the 7-Up Twin 100′s, visit www.cra-racing.com and www.toledospeedway.com. 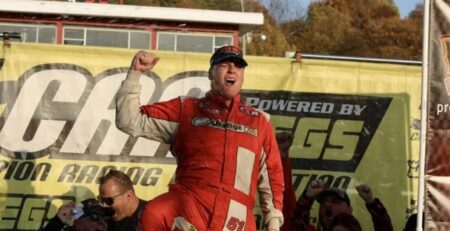