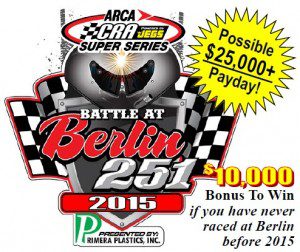 Salem, Indiana (Tuesday, April 28, 2015) – Champion Racing Association Powered by JEGS officials have released the entry form for the Battle at Berlin 251 Presented by Primera Plastics, which will take place at Berlin Raceway located in Marne, Michigan, on Tuesday, June 16th. The 251 lap event, sanctioned by the ARCA/CRA Super Series Powered by JEGS, will pay out over $100,000 in purse and cash bonuses, for one of the largest total payout Template Super Late Models will race for all season. The event will pay $10,000 to win, $8000 for second, $6500 for third, down to an astounding $2000 to start for a 30 car starting field.

Berlin Raceway will pay out several big cash bonuses for the event including a $10,000 bonus if the winner of the Battle at Berlin 251 has never raced at Berlin Raceway before the 2015 race season. The event will also feature three New Star Bonuses of $2,500, $1,000 and $500 to the top three finishers who have never finished in the top five in a Berlin Late Model event, Template or Outlaw. Berlin will also award a $1000 Fast Qualifier Bonus, a $500 Hard Luck Award Bonus, a $500 Most Laps Lead Bonus and a $500 Halfway Leader Bonus.

The Battle at Berlin 251 Presented by Primera Plastics will be the first event of the JEGS/CRA $100,000 Super Late Model Triple Crown, which will pay a driver $100,000 bonus if a driver can win the Battle at Berlin 251, the Stoops Freightliner Redbud 300 at Anderson Speedway on July 18th, and the 43rd Annual Winchester 400 at Winchester Speedway on October 11th. There is a $10,000 bonus if a driver can only win two of the events. If no driver wins two of the Triple Crown events, the driver who accumulates the most points during those three events will receive a $5,000 bonus and the title of Champion of the JEGS/CRA $100,00 Super Late Model Triple Crown.

As in the past the Qualifying Order for the Battle at Berlin 251 will be the reverse of how the event entries are received into the CRA office, teams are encouraged to enter as soon as possible.