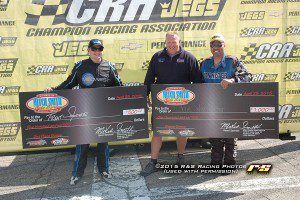 Anderson, Indiana (Sunday, April 26, 2015): The second race of the 2015 racing season for the premier series within Champion Racing  Association (CRA) Powered by JEGS, was at the track that has hosted the most events overall in CRA history: The fast 1/4 (0.250) mile high-banked paved oval of Anderson Speedway (IN) in Anderson, Indiana. The ARCA/CRA Super Series Powered by JEGS co-headlined the tracks prestigious Glen Niebel Classic with the running of the Madison County Community Health Center 125 which was postponed by a day due to weather to Sunday, April 26th.

In the ARCA/CRA Super Series’ 57th all-time appearance at the track and 123rd race overall in CRA’s 19-year history, this event would also serve as the only tune-up for the prestigious Redbud 300 to be held on July 18th, the second race of the JEGS / CRA $100,000 Super Late Model Triple Crown Series. When the checkered flag fell, one of the stalwarts of the ARCA/CRA Super Series from the early days of the old Kendall Oil Indiana Super Late Model Series scored one for the veterans. Eddie Van Meter ended a nine-year / 142-race winless streak by scoring the popular victory.

“This is truly unbelievable. There were times where I wondered if we’d ever get back here. Nine years man, wow! I just can’t believe this,” An emotional Van Meter responded in victory lane after climbing from his #23 EDCO Welding / Donna Van Meter Racing Enterprises / Chevrolet to the deafening roar of the crowd on hand and the happy crew surrounding him. “We never gave up, no matter what. We always knew we were still competitive even with all these teams we run against. We made a commitment this season to try for the championship again after picking and choosing the last few years. Well we’re here now and this is pretty damn special.” The Indianapolis, Indiana veteran added.

After EDCO Welding Fast Qualifier, Rookie Mark Lambert drew a nine for an inversion, he placed his Car Owner, Greg Van Alst, the 2014 CRA Late Model Sportsman Series Champion who as part of his championship winning season from a year ago, was racing in a one-race deal with Scott Neal Racing, and 19-year-old Cody Coughlin started on the front row. After Coughlin, the 2013 JEGS/CRA All-Stars Tour Champion, led the opening lap. Van Alst powered his way past Coughlin to take over the top spot on lap two.

Trent Snyder, a three-time winner at the Anderson, Indiana speed plant in JEGS/CRA All-Stars Tour competition, worked his way past Coughlin and went after Van Alst. Snyder did take the lead on lap 16 only to see Van Alst reclaim the top spot. Snyder fell back and would also lose second to Senneker Performance Rookie of the Year title contender, 17-year-old Hunter Baize who would then try his hand at dethroning Van Alst from the top spot. After a hard fought battle between the two drivers, things came to a head on lap 71 when going into turn one, the two drivers touched sending Van Alst around in turns one and two. Both drivers went to the rear of the field handing the lead to Grant Quinlan.

Quinlan, the Overall and Rookie of the Year points leader coming into the weekend would lost the lead on the initial restart to a hard-charging Eddie Van Meter who skated around the 16-year-old freshman coming out of turn two after the green flag came back out. Van Meter would maintain the lead despite the constant challenges from the determined Quinlan. On one final restart on lap 117, Snyder had regrouped and shot past Quinlan to reclaim second and set his sights on Van Meter for one final battle. But Van Meter was up to the challenge and would bring him the popular win.

For Van Meter, it snapped a 142-race winless streak dating back to July 22nd, 2006 when he scored his only other ARCA/CRA Super Series victory at what is now Angola Motorsport Speedway (IN). In addition to the trophy and a $3,000 payday, Van Meter also scored a $1,000 bonus from Mitch Smith Auto Service as well as the VanDoorn Racing Development Fastest Practice Lap Award. He would also shoot up the points standings with the win by advancing 13 positions from 17th to fourth heading into the next race at Berlin Raceway (MI) on May 16th.

Snyder in his #88 Mitch Smith Auto Service / Chevrolet scored a career high second place finish in only his fifth career start in the ARCA/CRA Super Series. The Glen Ellyn, Illinois competitor picked up a $500 bonus from his primary sponsor, Mitch Smith Auto Service as well as the AR Bodies Cool Move of the Race Award for his daring pass of Quinlan on the final restart to retake second place. The 31-year-old driver originally from Ironton, Minnesota also had support from long-time CRA supporter, Great Deals Savings Magazine.

Rounding out the podium finishers would be New Albany, Indiana driver, Brett Robinson who tied a career high finish with a third place showing in his #15 Workout Industries / Chevrolet. The 22-year-olds previous third place finish was at Lucas Oil Raceway (IN) back on September 22nd, 2013. Robinson would collect the FLUIDYNE High Performance Cool Under Pressure Award for getting into the top five early in the race and never leaving the rest of the race despite the constant position swapping going on around him.

Baize picked up the Senneker Performance Rookie of the Race Award with his career high fourth place effort in just his third career start in the ARCA/CRA Super Series. The 17-year-old freshman from Bremen, Kentucky in his #13 Mountaineer Firewood / Ford also picked up the Hedman Hedders Husler Award after having to go to the rear of the field for his role in the incident with race leader, Van Alst on lap 71. In addition, Baize is now second in both the Overall and Rookie points standings after two events.

18-year-old Paul Shafer Jr., completed the top five in his #7 ClassyChassisTrucks.com / Chevrolet as the Portage, Indiana driver was a part of an early caution flag and also went to the back. Throughout the rest of the race, the 2014 Rookie Runner-Up steadily worked his way towards the front and was rewarded with his first top five finish of his sophomore season. He also earned the C.V. Racing Products Hard-Charger Award as well as the first Hoosier Racing Tire Performance Award with his 14th to fifth place run.

Veteran Eddie Hoffman finished in sixth for the second race in a row and moved up to third in the season long points chase after two races. He also picked up the second Hoosier Racing Tire Performance Award after starting 13th. Lambert, the EDCO Welding Fast Qualifier, finished seventh, tying a career high finish with his same showing back on August 1st, 2011 at Anderson in the Redbud 300. Quinlan fell back to eighth but maintains both the Overall and Rookie points leads while 2014 Rookie of the Year Wes Griffith Jr., finished ninth. Phil Bozell completed the top 10 after starting 17th on the grid. Van Alst, who broke a rear hub and was out of the event on lap 89, did collect the VanDoorn Racing Development Lap Leader Award for leading 69 total laps.

Earlier in the afternoon in EDCO Welding Qualifying, Lambert picked up his first career award by turning in a 12.265 which equals out to 73.380mph. The long-standing Track Record remains with 2005 ARCA/CRA Super Series Champion, Jeff Lane who went an 11.922 back on August 9th, 2008, a span of almost seven years.

The third race of the 2015 racing season for the ARCA/CRA Super Series Powered by JEGS will also serve as another tune-up for a JEGS / CRA $100,000 Super Late Model Triple Crown Series race. The Berlin 125 on Saturday, May 16th will be conducted at the famed 7/16s (0.437) mile semi-banked paved oval of Berlin Raceway, located west of Grand Rapids in Marne, Michigan. This race is the only tune-up for the ARCA/CRA competitors before the first race of the $100,000 Triple Crown Series race, which will also be ran at Berlin, the Battle at Berlin 251 on Tuesday, June 16th.

The 20th all-time appearance at the tricky West Michigan oval has seen Brian Campbell visit victory lane the most of anyone as he has six career victories. Brian’s Father, the legendary Fred Campbell as well as NASCAR Sprint Cup Series star, Kyle Busch both have three wins apiece as Three-Time Series Champion (2012, 2011 & 2009) Johnny VanDoorn has visited victory lane twice including the last two Battle at Berlin 251’s. Another Three-Time Series Champion (2008, 2006 & 2000) Scott Hantz as well as Terry VanHaitsma, Tom Thomas, Tim Curry and Ross Meeuwsen also have one win each.

For more information about the 2015 racing season for all four touring series’ within Champion Racing Association Powered by JEGS, go to the new and improved series website located at: www.cra-racing.com You can also follow along with all of CRA’s touring series’ on Facebook at: www.facebook.com/ChampionRacingAssociation and on Twitter at: www.twitter.com/CRAracing Finally, for more information about Anderson Speedway, the host track for the third race of the year for the ARCA/CRA Super Series, go to the track website at: www.berlinraceway.com 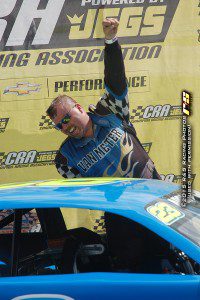 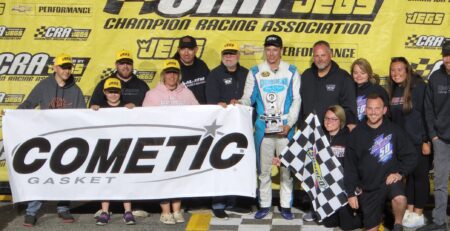