Schererville, Indiana (Monday, May 25, 2015): The ARCA/CRA Super Series Powered by JEGS went to head to head with their counterparts within the ARCA Midwest Tour Presented by Scag Power Equipment in the running of the Calypso Lemonade Chicagoland Showdown. The big 1/2 (0.500) mile semi-banked paved oval of Illiana Motor Speedway, located south of Chicago, Illinois and east of the Illinois / Indiana state line in Schererville, Indiana served as hosts on Memorial Day Monday, May 25th and featured a unique triple 50s format with the final 50-lap main crowning an overall winner.

Earlier in the day, the ARCA/CRA Super Series teams competed in a 50-lap qualifier race for ARCA/CRA points while the ARCA Midwest Tour contingent also competed in a separate 50-lap qualifier race for Midwest Tour points. Then the two tours collided head to head in the final 50-lap headliner paying $5,000 to win. The top 12 from each qualifier transferred to the final 50 lap Showdown with Provisionals filling out the remainder of the 30-car starting field. As for the ARCA/CRA Super Series main for points and contingencies, 17-year-old rookie Hunter Baize scored the victory after starting on the outside of the front row and leading all 50 laps for his first career win.

“This is my first time here and I didn’t think we were that good this morning in Practice. But then the car started coming to life and we were only 2/10s off of fast time in Qualifying. Then in the race the car just got better and better and man here we are. I can’t believe this,” The jubilant driver of the #13 Mountaineer Firewood / VanDoorn Racing Development / Ford stated in victory lane after the race. “I have to thank everyone that is a part of this. Most importantly my Lord and Savior Jesus Christ, for without him, we all wouldn’t be here. My Parents (Robbie & Melinda Baize) as well as my Crew Chief, Butch VanDoorn, my driving coach, Johnny VanDoorn and this entire Hunter Baize Racing team.” He added.

After Chicagoland standout and former Illiana Track Champion, Jeff Cannon scored the overall Fast Qualifying time between the ARCA/CRA Super Series and ARCA Midwest Tour competitors, Cannon elected for the ARCA/CRA main to go first and would then draw a six for an inversion. Current Illiana Super Late Model points leader, Anthony Danta and Baize would lead the CRA field to Chief Starter, Scott Menlen’s green flag and it would be Baize who would beat the weekly track favorite to the first corner to take the early lead from the outside lane.

Baize would set a torrid early pace while the battle for second brewed between Eddie Hoffman, who quickly fought his way up from his seventh starting spot and 16-year-old Grant Quinlan, the current overall and rookie of the year points leader. Soon Cannon joined the duo and the three-some would stage an exciting battle for position with Baize watching in his rear view mirror.

While the battles continued behind him, Baize continued to put more and more real estate between himself and the rest of the field. Finally with 15 laps to go, Cannon emerged from the battle he was in with Hoffman and Quinlan and set his sights on Baize who had almost an entire straightaway lead on the entire field. Cannon slowly began reeling in Baize, but with the event only a 50-lap affair, the Blue Grass State teenager had built up enough of a cushion to keep Cannon safely behind him and give the Bremen, Kentucky driver his first career win in the ARCA/CRA Super Series and first ever in a Super Late Model. Overall it was just his second ever triumph in a full-bodied stock car.

For his efforts, Baize closed the gap on Quinlan in the chase for both the overall and rookie of the year titles as the two freshman came into the weekend first and second in both points standings. He also collected the Senneker Performance Rookie of the Race award as well as the VanDoorn Racing Development Lap Leader award for staying out front all 50 laps of the caution free event, just the second flag to flag event in the ARCA/CRA Super Series’ 19-year history.

Cannon would give a valiant effort but would have to settle for second in his #33 Govert Auto Body / Chevrolet. The 36-year-old driver, a former track champion in weekly Super Late Model competition at Illiana did record a career high finish in just his 13th career appearance spread over the past 10 seasons. The Kouts, Indiana veteran did leave the track with both the EDCO Welding Fast Qualifier award and the Mille Electric Welding Fast Qualifier award as well as the AR Bodies Cool Move of the Race award for getting passed Hoffman and Quinlan to take second and allow him to chase down Baize.

Overall and rookie points leader, Grant Quinlan tied a career high finish of a third in his #28 Superior Tool & Mold / Chevrolet. The 16-year-old driver, the 2014 Howie Lettow Memorial Rookie of the Year in the JEGS/CRA All-Stars Tour maintained both points leads and also scored the FLUIDYNE High Performance Cool Under Pressure award after his race long battles with Cannon and Hoffman for positions second through fourth.

Hoffman, a former track champion at Illiana as well, hung on for a fourth place showing in his #71 LisaThomasSalon.com / Ford after the previously mentioned race long battle with Cannon and Quinlan. The 55-year-old from Wheaton, Illinois did pick up the VanDoorn Racing Development Fastest Practice Lap award. Completing the top five was another Chicagoland veteran, Boris Jurkovic. The Manhattan, Illinois standout in his #53 Reliable Recovery Services / Ford started eighth and entered the top five late in the caution free race.

Earlier in the afternoon in EDCO Welding / Miller Electric Welders / VDL Fuel Systems Qualifying, Cannon set the mark with his first career ARCA/CRA Super Series Fast Qualifier award with a 19.421 which measures out to 92.683mph. The ARCA/CRA Super Series Track Record still belong to Boris Jurkovic who went an 18.864 back on June 21st, 2008.

In the thrilling final 50-lap Feature for all the accolades and the Tommy Gunn trophy, 2011 ARCA Midwest Tour Champion, Andrew Morrissey scored the victory ahead of Hoffman, Cannon, Ricky Baker and 2014 ARCA Midwest Tour Champion, Ty Majeski who completed the top five. Shafer Jr., was sixth as Griffith Jr., Anthony Danta, Matt Kocourek and 19-year-old Austin Nason were the top 10. Of the top 10 finishers, five were represented by Champion Racing Association (CRA) Powered by JEGS.

As for the ARCA Midwest Tour 50-lap Feature which was for full ARCA Midwest Tour points, Baker went to victory lane for the first time in his career in an ARCA MT event. He was trailed across the stripe by Chris Weinkauf, John Nutley, Cardell Potter and Morrissey were the top five. Majeski was sixth as Skylar Holzhausen, Nason, Andy Jones and James Swan finished off the top 10.

The fifth race of the 2015 racing season for the ARCA/CRA Super Series Powered by JEGS will also be one of the biggest and highest paying races in North America. The Battle at Berlin 251 Presented by Primera Plastics serves as round #1 of the JEGS/CRA $100,000 Super Late Model Triple Crown Series on a special Tuesday, June 16th at Berlin Raceway in Marne, Michigan. $10,000 awaits the winner with the 30-car starting field getting a minimum of $2,000 just to start the prestigious event.

In addition, Berlin Raceway will pay out several big cash bonuses for the event including a $10,000 bonus if the winner has never raced at Berlin before the 2015 race season. The event will also feature three New Star Bonuses of $2,500, $1,000 and $500 to the top three finishers who have never finished in the top five in a Berlin Late Model event, Template or Outlaw. Berlin will also award a $1,000 Fast Qualifier Bonus, a $500 Hard Luck Award Bonus, a $500 Most Laps Lead Bonus and a $500 Halfway Leader Bonus. In all total, over $100,000 in cash and bonuses will be distributed

If all the awards and bonuses from the track weren’t enough, the Battle at Berlin 251 will also be the first event of the JEGS/CRA $100,000 Super Late Model Triple Crown, which will pay a driver $100,000 bonus if a driver can win the Battle at Berlin 251, the Stoops Freightliner Redbud 300 at Anderson Speedway on July 18th, and the 44th Running of the Winchester 400 at Winchester Speedway on October 11th. There is a $10,000 bonus if a driver can win two of the events. If no driver wins two of the Triple Crown events, the driver who accumulates the most points during those three events will receive a $5,000 bonus and the title of 2015 JEGS/CRA $100,000 Super Late Model Triple Crown  Series  Champion.

In six previous incarnations of what is now the Battle at Berlin 251, Brian  Campbell won what was the Rowdy 251 back in 2009 while NASCAR Sprint Cup Series star, Kyle Busch won the next three events between (2010-2012). When the race emerged at what is known today as the Battle at Berlin 251, Three-Time  ARCA/CRA Super Series Champion, Johnny VanDoorn has won the last two races of the prestigious race.

Overall, Berlin has hosted the ARCA/CRA Super Series on 20 occasions with Campbell winning the last series event on May 16th. In addition to his 251 win in 2009, Campbell has seven overall ARCA/CRA wins at his home track. All three of Busch’s wins have come in the 251 and so have VanDoorn’s two victories. Another Three-Time Series Champion (2008, 2006 & 2000) Scott Hantz as well as Terry VanHaitsma, Tom Thomas, Tim Curry and Ross Meeuwsen all have one win apiece.

For more information about the 2015 racing season for all four touring series’ within Champion Racing Association Powered by JEGS, go to the new and improved series website located at: www.cra-racing.com You can also follow along with all of CRA’s touring series’ on Facebook at: www.facebook.com/ChampionRacingAssociation and on Twitter at: www.twitter.com/CRAracing Finally, for more information about Berlin Raceway, the host track for the fifth race of the year for the ARCA/CRA Super Series and first event of the JEGS/CRA $100,000 Super Late Model Triple Crown Series, go to the track website at: www.berlinraceway.com 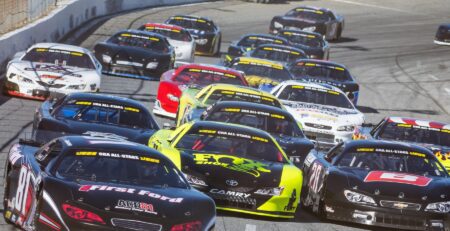