Wyoming, Michigan (Monday, June 15, 2015): If there’s anything resembling a home track advantage when it comes to Berlin Raceway, look no further than Wyoming, Michigan veteran, Brian Campbell. When it’s time for the Battle at Berlin 251 Presented by Primera Plastics on Tuesday, June 16th, Campbell comes in as the heavy favorite to bring home the trophy and the $10,000 payday that comes with it. No one can argue with the success the 36-year-old has had at the historic 7/16s (0.437) mile semi-banked paved fairgrounds oval.

Out of his 16 career ARCA/CRA Super Series Powered by JEGS triumphs, which good for fifth all-time and just two out of third on the all-time wins list, seven of those trips to victory lane have come at his home track located just west of Grand Rapids in Marne, Michigan. The most recent win came in the Berlin 125 on May 16th and was the third trip to victory lane of the 2015 racing season for him.

His other victories so far during the 2015 racing season have come in the 2015 ARCA/CRA Super Series season opener, the 7-Up 100 Presented by Royal Truck & Trailer Sales at Toledo Speedway in Toledo, Ohio on April 11th and then in the Boyne Machine Company Super Late Model Series season opening 60-lap feature at Berlin on May 2nd. He would back those wins up two weeks later in the first of two appearances by the ARCA/CRA Super Series at Berlin.

“We’ve just had a really good year so far and it’s not all because of me. I get all the credit behind the wheel, but all of the accolades should be going to (Crew Chief) Henry Rosendall and this entire Lakeshore Motorsports team. ” The appreciative driver stated prior to Practice Day at the famed West Michigan speed plant. “I don’t get to enjoy seeing that checkered flag first if it wasn’t for this team we’ve all had a hand in putting together and fine tuning everything. Especially after last year. This season, things have been going well and we hope to continue building on that.” He added. 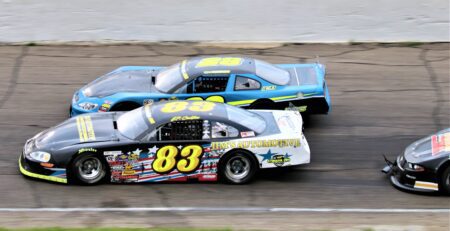