Rochester Hills, Michigan (Tuesday, June 23, 2015): Motor City Racing Promotions (MCRP) has been a force in the motorsports world during the winter months operating and promoting the widely popular Midwest Indoor Racing Series throughout the state of Michigan since the 2014 season. For the 2015 campaign, MCRP will exercise their professional experience in auto racing by taking their expertise outside and promoting the Dixie 100 Presented by JEGS.com. President Scott Menlen and Administrative Manager, Laura Tucker have been diligently working and have succeeded in bringing Champion Racing Association (CRA) Powered by JEGS to Dixie Motor Speedway on Friday, July 10th.

“We are all very excited to continue our working relationship with Champion Racing Association. Dixie Motor Speedway is a perfect facility; it’s a fun track to drive and a great track to watch a race.” offered Motor City Racing Promotions Founder / President, Scott Menlen. “We are proud to be a part of bringing the JEGS/CRA All-Stars Tour back to Birch Run, Michigan. We’ve been successful with our Midwest Indoor Racing Series events during the winter and the time is right to step up into the outdoor summer side of auto racing.” he added.

For the first time since the 2013 racing season, the JEGS/CRA All-Stars Tour Presented by Chevrolet Performance returns to the Tri-Cities area and will headline the night with the running of the Dixie 100 Presented by JEGS.com. In three previous appearances, 2013 Tour Champion, Cody Coughlin, now a Joe Gibbs Racing development driver, was the last victor during his championship winning season. Current NASCAR Camping World Truck Series rookie of the year title contender and 2012 Tour Champion, Daniel Hemric won during his championship run in 2012. Chicagoland veteran, Eddie Hoffman won the inaugural JEGS/CRA race in Birch Run, Michigan in 2011.

In addition to the JEGS/CRA All-Stars Tour, the Spartan Speedway based Michigan Legends Series will be taking on the Whittemore Speedway Legends on neutral ground for the first time on the Dixie Motor Speedway’s ⅓ mile flat oval. Plus Pure Stocks from the neighboring tracks of Auto City Speedway, Owosso Speedway and Whittemore Speedway will all come together for a grueling grudge match pitting the cars and stars from all three tracks together in one place.

There will be a special practice day slated for Thursday, July 9th and is open to all competitors who are racing the following day. The pit gates will open at 3:30p.m., and rotating practice for all divisions will go from 4:30-7:30p.m. Pit passes for the open practice day will be $20.00. Then on race day, Friday, July 10th, the pit gates will open at 12:00p.m., while the grandstands gates will swing open at 5:00p.m. For a complete Schedule of Events and for more event information visit: www.dixie100.com.

Dixie Motor Speedway is located conveniently off of I-75 in Birch Run, Michigan. The smooth 4/10 semi-banked oval provides great racing action that can be seen under the brightest track lights in the State of Michigan. New aluminum grandstands, additional restrooms and a spacious concourse makes this facility a favorite for fans and drivers alike. Dixie Motor Speedway sits between two great family friendly tourist destinations, the Birch Run Prime Outlet Mall and Michigan’s Little Bavaria, Frankenmuth.

Motor City Racing Promotions, based in Troy, Michigan was founded in 2014 to be the new sanctioning body of the Midwest Indoor Racing Series. The first race, for what is now Michigan’s premier touring series during the winter months, was held at the Perani Arena and Event Center in Flint, Michigan on November 3rd, 2012 under the direction of MGM Motorsports.

It appeared that defending JEGS/CRA All-Stars Tour champion Jack Dossey III was on his way to his first-ever series victory... read more 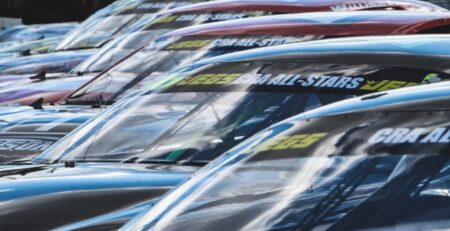