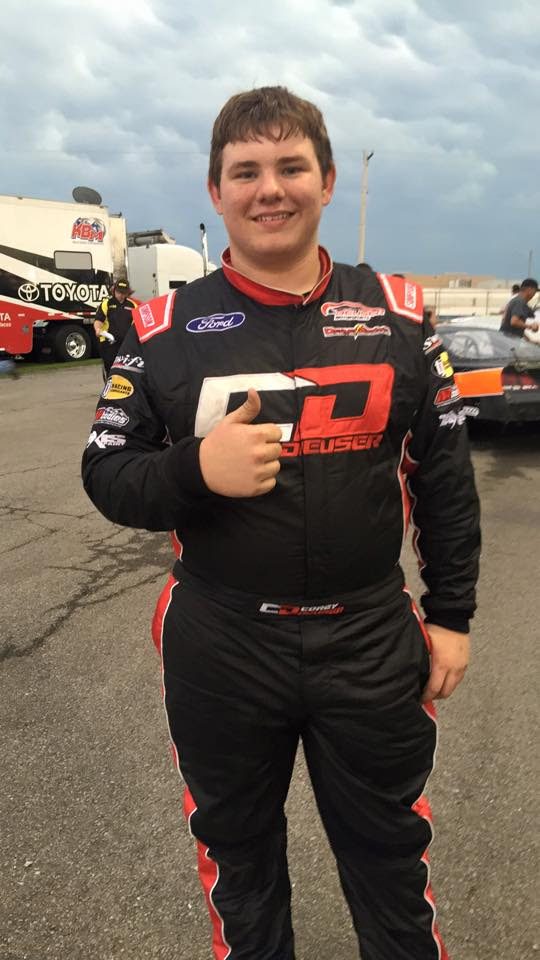 CRA_admin2015-07-21T13:16:10-04:00
Huntersville, North Carolina (Tuesday, July 21, 2015): Corey Deuser is back! The 17-year-old Hoosier State native scored his first top-10 finish of 2015 on Friday night in the Anderson 100 Presented by JEGS.com. After a slow start to the season, Deuser jumped back behind the wheel of the No. 12 Deuser Electric / Mr. Asphalt Pro Late Model for Dixie 100 winner and 2014 JEGS/CRA All-Stars Tour Champion Dan Leeck at Anderson Speedway (Ind.). Deuser was fast in practice, spending most of his time near the top of the speed charts. He backed that up with a second-place qualifying effort. The invert was an eight, meaning Deuser would start seventh. He went on to finish ninth.
For 2013 JEGS/CRA Howie Lettow Memorial Rookie-of-the-Year Deuser, the last 18 months have been tough, only scoring one top-five since his win at Winchester Speedway (Ind.) back in October of 2013. In May, Deuser signed with Dan Leeck Racing to pilot the No. 12 Late Model for select races throughout the remainder of the 2015 season. Several rainouts and postponements have put a damper on the season for the Indiana native. Deuser entered race No. 5 in the JEGS/CRA All-Stars Tour season looking to get his season back on track, and he did just that. Not only was he fast in practice, but he also backed it up with a second-place qualifying effort. After starting seventh, he raced within the top-10 all night. At the end of the 100-lap, Anderson 100 Presented by JEGS.com, he found himself in the top-10 for the first time this season, scoring a very impressive ninth-place finish at the tough (0.250) ¼-mile Anderson Speedway (Ind.).

“It felt great being a threat to win again,” Deuser said. “We had a great car all day and it showed for sure. The race just never went our way, but we will move to the next one knowing we have the stuff to compete for poles and wins.”

Although his next event is not yet known, Deuser will remain with Dan Leeck Racing for the balance of the 2015 Late Model schedule. He will run a mixture of Super and Pro Late Model events, driving a No. 12 car for the 2014 JEGS/CRA Champion.

One of the most popular grassroots racing events in North America will be making its way into living rooms worldwide... read more