Marne, Michigan (Saturday, August 1, 2015): The sixth race of the fifth anniversary 2015 racing season saw the JEGS/CRA All-Stars Tour Presented by Chevrolet Performance head to their traditional stop in West Michigan on Saturday, August 1st. The Berlin 100 Presented by JEGS.com was held at the famed 7/16s (0.437) mile semi-banked paved oval of Berlin Raceway, located within the Berlin Fairgrounds and west of Grand Rapids in Marne, Michigan. The Tour had visited the famed Great Lakes State facility each year of its existence and had produced four different winners.

In the fifth all-time visit to the immaculate facility, a stout field of traveling invaders took on the always tough weekly track contingent and when the checkered flag flew, it was another home track driver who visited victory lane and a familiar face at that. Brian Campbell, already one of the most successful drivers in Berlin Raceway and ARCA/CRA Super Series Powered by JEGS history made a rare JEGS/CRA All-Stars Tour appearance count with his third career victory in only four total JEGS/CRA starts. For the Wyoming, Michigan veteran, it was his first career start at his home track in JEGS/CRA competition and first tour start since September 1st, 2012 when he won at Owosso Speedway (MI).

“We weren’t even thinking about coming to this race until about Wednesday. The car was in pieces from getting wrecked down in Indy (Lucas Oil Raceway) last weekend and we didn’t even have a crate motor to use,” Laughed the 36-year-old West Michigan standout after pulling into victory lane in his #47 Enterprise Iron & Metal / Merritt Speedway / Ford. “With this race being here at home (Berlin Raceway), we all pitched in, got the car back together, borrowed a motor and here we are. I can’t say enough about this team. We’ve been fortunate enough to enjoy quite a bit of success here. These fans are really great to race in front of and it’s a bonus that the entire family is here too.” He added.

After Boyne Machine Company Fast Qualifier, Trevor Berry drew a six for an inversion, Howie Lettow Memorial Rookie of the Year point’s leader, 19-year-old Quinnton Bear and Overall Drivers Points leader; Dalton Armstrong led the strong 27-car field to Chief Starter, Scott Menlen’s green flag to start the 100-lap main.  Bear would overtake Armstrong after a couple of laps of side by side racing to take the lead for himself and the top tour freshman, in his first ever appearance at Berlin, began to pull away from Armstrong and the rest of the field early on.

Travis Braden, who has been filling in behind the wheel of the #26 Bill Burba Motorsports machine the past four events, began his charge to the front and on lap 23 would drive past Bear to take over the lead. Braden, the 2013 JEGS/CRA winner at Berlin would bring Campbell, who started fourth, with him and the two standouts pulled away from the rest of the field to battle. With the back of the lead lap cars approaching the two leaders, Braden set himself up to pass the potential lapped cars when Campbell made a bold pass around Braden and two lapped cars in a daring four-wide pass for the lead on lap 45, earning Campbell the AR Bodies Cool Move of the Race award.

Once Campbell got out front, the home track favorite would set sail the rest of the race even with only two cautions slowing the pace down including the first one, which didn’t come until lap 52. After another yellow three laps later, it was all Campbell from there who would keep a safe piece of real estate as well as lapped traffic between himself and Braden to score the victory. In addition to the paycheck and trophies, Campbell also collected the D.T.S. Drive Train Specialists Halfway Leader award.

Braden came home in second for his best finish to date behind the wheel of the #26 Platinum Express / Chevrolet. The 21-year-old driver, the Two-Time Reigning ARCA/CRA Super Series Champion recently won in his first career start in the ARCA Racing Series Presented by Menards back on July 24th at Lucas Oil Raceway (IN). The Wheeling, West Virginia driver, driving for his family owned team in Indianapolis, took the win in the Sioux Chief PowerPEX 200 Presented by Federated Car Care. At Berlin, Braden would also give his team, Bill Burba Motorsports the points lead in the JEGS/CRA All-Stars Tour Owners Points Standings.

Grand Rapids, Michigan driver, Alec Carll, known more for his appearances in the ARCA/CRA Super Series when CRA comes to his home track of Berlin Raceway, made only his second career JEGS/CRA All-Stars Tour start and came away with a career high third place run in his #51 Euro-Tech / Chevrolet. The 25-year-old driver, who was running the car for normal pilot, Justin Ryan who races at the track in the Boyne Machine Company Super Late Model Series, also collected the FLUIDYNE High Performance Cool Under Pressure award after starting and finishing in third.

Another driver who calls the historic West Michigan fairgrounds oval home, Chris Koslek would continue his strong runs on his home turf with a fourth place finish in his #23 West Michigan Tool & Industrial Supply / Chevrolet. The 28-year-old driver continued his knack for strong finishes in recent events at Berlin in both the JEGS/CRA All-Stars Tour and ARCA/CRA Super Series by collecting the Five Star Racecar Bodies Hard-Charger award as well as the first Great Lakes Tire / Hoosier Racing Tire Performance award after starting in 14th.

Bear, the current Howie Lettow Memorial Rookie of the Year Presented by VanDoorn Racing Development points leader, extended his already massive freshman points lead while also climbing to third overall in the JEGS/CRA All-Stars Tour Drivers Points Standings with his third top five finish of the season in fifth. The 19-year-old driver from Avon, Indiana in his #94 Buzze Racing / Chevrolet led the first 22 laps and also picked up his third VanDoorn Racing Development Rookie of the Race award

Earlier in the afternoon in Boyne Machine Company Qualifying, Berry out-timed the strong 27-car field on the property and broke the JEGS/CRA All-Stars Tour Track Record in the process when he went a blistering 16.210 = 97.273mph. Berry’s time bested the old record by 0.023 seconds which used to belong to Braden who, back on June 14th, 2013 turned a 16.233.

The next race on the calendar within the Fifth Anniversary 2015 racing season for the JEGS/CRA All-Stars Tour Presented by Chevrolet Performance will mean a trip across the Great Lakes State for the JEGS/CRA contingent. The uniquely shaped 0.393 mile semi-banked paved oval of Auto City Speedway, located north of Flint in Clio, Michigan will serve as hosts of the Dog Days of Summer 100 Presented by JEGS.com.

There have been three races held at the Eastern Michigan speed plant as Eric Lee went to victory lane for the first and thus far only time in his JEGS/CRA All-Stars Tour career back in 2014. Robbie Johnson, a former Track Champion in the tracks old weekly Super Stocks division defending the home tracks honor in 2013 while in the tours’ inaugural appearance back in 2012, that seasons eventual champion, Daniel Hemric, now a Rookie of the Year title contender in the NASCAR Camping World Truck Series, took the checkered flag first.

For more information about the remainder of the 2015 racing season for all four touring series’ within Champion Racing Association Powered by JEGS, go to the series website at: www.cra-racing.com You can also follow along with all of CRA’s touring series’ all season long on Facebook at: www.facebook.com/ChampionRacingAssociation and on Twitter at: www.twitter.com/CRAracing Finally for more information about Auto City Speedway, the host track for the seventh race of the 2015 racing season for the JEGS/CRA All-Stars Tour, go to the track website at: www.autocityspeedway.com

(Salem, IN & Pensacola, FL) - Officials from the ARCA/CRA Super Series Powered by JEGS and the Southern Super Series... read more 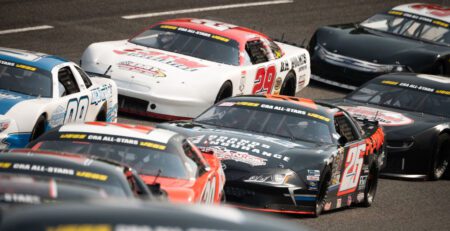