Salem, Indiana (Tuesday, August 25, 2015): The JEGS/CRA All-Stars Tour Presented by Chevrolet Performance will be back in action this Saturday night in Michigan for the Big O Classic 100 Presented by JEGS.com at Owosso Speedway located in Ovid, Michigan. Saturday’s race at the 3/8’s mile progressively banked oval will be the eighth event in the 12 race 2015 schedule for the Crate Motor Series sanctioned by Champion Racing Association Powered by JEGS. Saturday’s event will be the fourth series event scheduled at Owosso Speedway, 2011 series Champion Erik Jones won the series event there in 2011, while Brian Campbell won in 2012, the 2013 event was canceled because of weather. Chad Finley got the win in last year’s event after a spirited battle with Grant Quinlan, the win was Finley’s fourth with the series.

Coming into Saturday night’s race Dalton Armstrong is the series driver point’s leader after seven events, he won the series last event at Auto City Speedway on August 8th and the series season opener at Springport Motor Speedway. The Bill Burba Motorsports Team is in first place in the series owner points after seven events this season. 2013 and 2014 ARCA/CRA Super Series Champion Travis Braden has driven the last five races for the team after Mike Stacy competed in the first two series events of the season. Both Armstrong and Braden are entered for Saturday’s event.

Series veteran Josh Nelms is also entered, he is currently second in driver points after getting his first series win on May 23rd at Columbus Motor Speedway. Nelms is 37 points behind Armstrong in series driver points and his TK Racing team is third in owner points. VanDoorn Racing Development Rookie driver Quinnton Bear is also entered, he is third in driver points with a season high finish of second at the series Dixie Motor Speedway event and backed that up with a strong second place finish in the ARCA/CRA Super Series event at Kalamazoo Speedway on August 12th.

There will be plenty of local competition entered for Saturday nights event, all have run part-time series schedules in 2015, including 2013 Auto City winner Robbie Johnson, Trevor Berry who finished a season high second in the Auto City Speedway event on August 8th, Kyle Hayden who finished fifth at Auto City, Travis Eddy, who finished seventh at Auto City and Kyle Crump who has won feature events in the Owosso Pro Late Model Division this season and is second in season points in that division.  Another local, Amber Slagle, will jump back behind the wheel to make her 2015 series debut on Saturday.

Pit gates will open on Saturday at 12noon. Practice will begin for the JEGS/CRA All-Stars Tour at 2:30pm with qualifying for the series starting at 6:15pm. The race program will begin at 7pm and will include an on track Autograph Session and the Big O Classic 100 Presented by JEGS.com for the JEGS/CRA All-Stars Tour Presented by Chevrolet Performance. The Owosso Speedway Sportsman and Pure Stocks will also be in action with heat races and features plus a 20 lap Power Puff Feature. More event information can be found at www.owossospeedway.com. 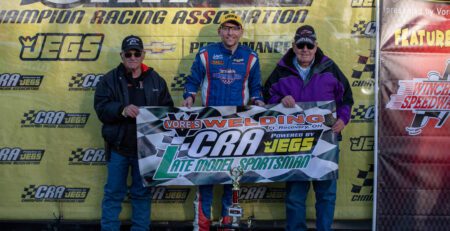