“We are looking forward to the rest of the county getting to see the ARCA/CRA Super Series Winchester 400 for the first time ever on a pay-per-view broadcast,” CRA Managing Partner RJ Scott told Speed51.com powered by JEGS.  “There is no other race like it in the world; where the unique and tough nature of the race track itself, combines with a stellar field of Super Late Models, for an incredible man versus machine versus the high-banks event.  The stands will be packed with many local fans, so it is exciting to think about bringing fans from all over the country into the Winchester 400 experience with Speed51’s live online television coverage.”

The Pay-Per-View video coverage will begin on Friday night at 6:15pm EST with qualifying for the JEGS/CRA All-Stars Tour event.  The racing card that night will also feature the CRA Late Model Sportsman, CRA Street Stocks, Vores Compacts and the 100-lap main event for the JEGS All-Stars Tour.

Saturday’s broadcast kicks off at 4:15 EST with Winchester 400 qualifying before moving onto feature racing for the night, including CRA Late Model Sportsman, CRA Street Stocks and Top Speed Modifieds.

The weekend coverage culminates Sunday with the running of the 44th Annual Winchester 400 for the ARCA / CRA Super Series.  51 TV hits the air at 1:30pm EST for pre-race ceremonies, with the green flag waving on the Super Late Model field at 2pm. There is a 150-mile (driving distance) blackout area for the broadcast surrounding Winchester Speedway.

“Everyone at Speed51 is excited to add the Winchester 400 to our list of online television broadcasts for the year,” said Speed51 Owner Bob Dillner.  “The Winchester 400 is one of the biggest events of the year and for us to be able to partner with CRA to bring the event live to fans is an honor for all of us.  With 400 laps of racing, live pits stops and a stacked field of cars, it is sure to be one of the best races of the year.   And who would want to miss Erik Jones try for the $100,000 JEGS bonus?”

The Winchester 400 broadcast is available now for purchase.  Fans can purchase Friday and Saturday’s broadcasts for $15.99 per day or the Sunday only broadcast for $24.99.  A special full weekend price of $39.99 will bring you all the action from Friday through Sunday.  All 51 Network yearly subscribers also receive a 10% discount on all Pay-Per-View broadcasts for the year. 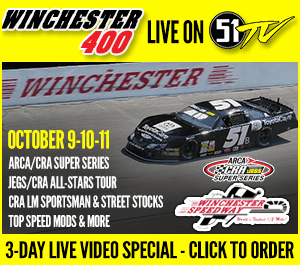 For more information regarding Speed51.com, contact Jana Wimmer (Director of Business) at jana@speed51.com.

Salem, IN (August 7, 2017) – The ARCA/CRA Super Series Powered by JEGS will head back to Michigan for the... read more

Salem, IN (June 14, 2017) – The Lawrence Towing CRA Street Stocks Powered by JEGS will be back in action... read more

Burton Nails Down Biggest Victory of Career at SpeedFest