The CRA Late Model Sportsman Series had visited LOR three times already in 2015 as part of the tracks LOR Stock Car Series Presented by Visit Hendricks County with Terry Fisher Jr., winning the last event on July 3rd. Jason Atkinson and Shawn Amor have also won this season. In the 15th overall appearance for the series in its 11-year history, Fisher Jr., returned to victory lane for the second time this season as the Fort Wayne, Indiana driver in his #28 Coe Heating & Air Conditions / Fisher Fabrication / Chevrolet grabbed the lead away from Amor with eight laps to go and pulled away for the win and the coveted CRA Fall Brawl Boxing Gloves.

“This whole Coe Racing Team has worked their asses off all year long. They are the reason I’m up here talking about this win,” The elated 29-year-old driver remarked on the stage in victory lane after the race. “We were really good all weekend long. I thought we were faster than we showed in Qualifying yesterday and we even saved a little bit for today. The car was just awesome to drive and has been all season long. We’ve had such a good year and I don’t want this to end at all. Between two wins in CRA and the nine at Baer Field (Speedway), I just want to keep going.” He added.

After Amor, the Allstar Performance Fast Qualifier, pulled an eight for an inversion, it would be Josh Timmerman and 17-year-old Jared Thomas leading the 22-car field to Chief Starter, Scott Menlen’s green flag. Timmerman jumped out to the early race lead as Amor immediately made his charge towards the front from his outside fourth row starting spot. In just two laps, Amor was already up to second and began chasing down Timmerman for the lead. On lap five, Amor would slip past to lead the field and brought Fisher Jr., the 2015 Baer Field Speedway Late Model Sportsman Track Champion, who started fourth, with him and the two black and red #28’s pulled away.

Fisher Jr., followed Amor around the massive 0.686 mile oval for over 20 laps before making his charge at the top spot. Several times he pulled up along-side the race leader, but couldn’t quite build enough momentum to complete the pass until lap 33. As the race was coming to an end, current points leader, Jason Atkinson joined the battle and Fisher Jr., knew it was time to go. He would finally clear Amor for the lead with seven laps to go, earning the AR Bodies Cool Move of the Race award and brought Atkinson with him. Fisher Jr., kept Atkinson and the rest of the pack a safe distance behind him the rest of the way en route to the win.

Atkinson’s #7 Oak Motors / Ford would extend his points lead in his quest for that coveted first CRA Late Model Sportsman Series Championship with his second place showing. The 38-year-old veteran collected the Racing Electronics Second to None award and needs to finish at least 11th or better at Winchester Speedway (IN) during Winchester 400 Weekend and the New Castle, Indiana driver, already the all-time career leader in most statistical categories in CRA LMS history will secure the 2015 Championship. Later in the afternoon, Atkinson, who is also the reigning CRA Street Stock Series Champion, earned his fourth victory of the season and retook that points lead with a race left in that series.

Amor wrapped up the podium finishers with a third place effort after leading for 28 laps and extended his points lead in the Lucas Oil Raceway Stock Car Series Presented by Visit Hendricks County with one race left in the mini-series at the immaculate facility. The 37-year-old driver from Plymouth, Indiana collected his third Allstar Performance Fast Qualifier award of the season the day before  will merely need to finish 23rd or better in his #28 Whitman’s Auto Sales / Chevrolet on October 18th and the LOR Stock Car Series title will head back to Northern Indiana with Amor and his crew.

Two-Time ARCA/CRA Super Series Champion, Brian Ross made a rare CRA Late Model Sportsman Series appearance and the 53-year-old driver from Plymouth, Indiana came away with a fourth place finish after starting fifth in his #16 Jim Blount’s Auto Salvage / Chevrolet. Ross fought off the advances of 19-year-old Billy Van Meter who completed the top five in his #23 EDCO Welding / Chevrolet. The Indianapolis, Indiana teenager moved up to the top five in points and has an outside chance at second going into the final points race for CRA LMS at Winchester on October 10th as well as in the Stock Car Series finale back at LOR on October 18th.

Defending Series Champion, Greg Van Alst finished sixth and goes into the final CRA LMS point’s event needing to win and some help in his bid to repeat as champion. Timmerman scored a seventh place finish while 18-year-old Trey Craig was eighth. Veteran, Tommy Cook, the 2015 Angola Motorsport Speedway Late Model Sportsman Track Champion, made his first CRA appearance of the season and finished ninth ahead of Outlaw Super Late Model veteran, Craig Everage, who was making his CRA Late Model Sportsman Series debut and finished off the top 10.

The two rookies still in the hunt for the 2015 Rookie of the Year title, Tony Brutti (who finished 11th) and Matthew Parsons (who finished 15th) will settle the freshman title at Winchester separated by just 16 points. If Parsons finishes seventh or better, the Columbus, Ohio driver will clinch the top rookie honors no matter what Brutti does. During Allstar Performance Qualifying held the previous afternoon, Amor’s fast lap over the 23 cars on the property was a 23.217 as he still holds down the Track Record he set this past April 24th when he turned in a 22.879 second lap.

There is also one more race at LOR scheduled for Sunday, October 18th which will serve as the LOR Stock Car Series Championship races for both the CRA Late Model Sportsman Series and the CRA Street Stock Series. In 15 all-time events, including four in 2015, Atkinson leads the way with four total checkered flags while Fisher Jr., (Twice in 2015) has three and Damon Ecoff has won twice. Shawn Amor has won this season while Lambert, Griffin, Gabe Cerny, Trey Craig, and Van Meter have all won once in previous appearances at the Circle City speed plant.

For more information about the rest of the 2015 racing season for all four touring series’ within Champion Racing Association Powered by JEGS, go to the series website at: www.cra-racing.com You can also follow along with all of CRA’s touring series’ on Facebook at: www.facebook.com/ChampionRacingAssociation and on Twitter at: www.twitter.com/CRAracing Finally for more information about Winchester Speedway, the host track for the 10th race of the 2015 racing season, go to the track website at: www.winchesterspeedway.com. 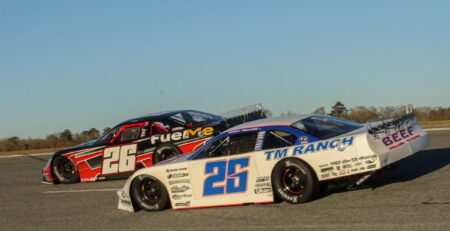