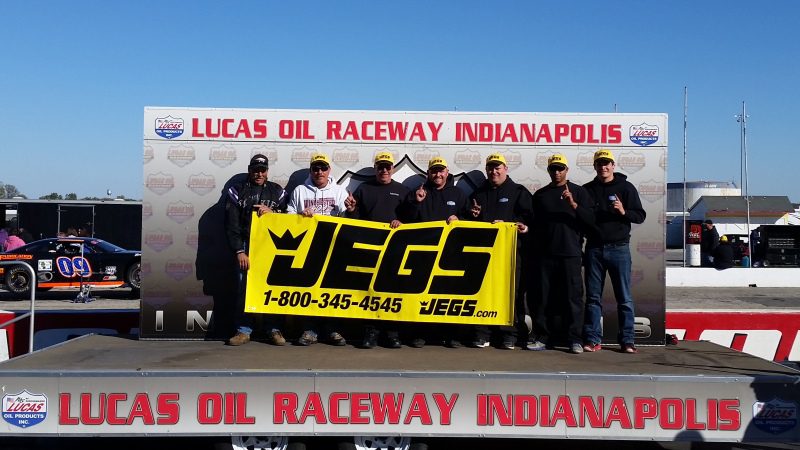 Brownsburg, Indiana (Sunday, October 18, 2015): With the Champion Racing Association (CRA) Powered by JEGS points season is complete, the Vore’s Welding CRA Late Model Sportsman Series Powered by JEGS had one more event remaining on the schedule. The immaculate Lucas Oil Raceway (IN) served as hosts of the Budweiser King of the Track Championship Sunday on Sunday, October 18th.  This event was the season finale of the LOR Stock Car Series Presented by Visit Hendricks County for both the CRA Late Model Sportsman Series and the CRA Street Stock Series.

Going into the 30-lap main, Shawn Amor merely needed to start the race and he would clinch the 2015 championship. Once that was complete, the race was for one final trophy and payday in 2015 which would also be for the final time overall for CRA in 2015. In the 16th overall appearance by the CRA Late Model Sportsman Series at LOR and fifth this season,  Terry Fisher Jr., scored his third straight victory at LOR while Shawn Amor only need to take the green flag to win the mini-series Championship at the immaculate 0.686 mile semi-banked paved oval.

“Wow, that’s three in a row down here. This has been an unbelievable season we’ve had. Between here and Baer Field Speedway in this car, plus with the Modifieds, we’ve got 14 wins this year.” The Fort Wayne, Indiana driver stated on stage after his third straight LOR Stock Car Series victory in his #28 Coe Heating & Air Conditioning / Chevrolet. “We came down here for the first time in early July for the 125-lapper and we kind of got in trouble, but we were running second. We had a real good car. Three in a row is a real accomplishment and this entire year has been really good for the whole Coe Racing Team. I can’t thank Scott (Coe) enough for the opportunity all year long.” The 29-year-old added.

As for the LOR Stock Car Series Presented by Visit Hendricks County title, Shawn Amor merely needed to take the green flag and the title was heading back to Plymouth, Indiana. “It feels really good to be the first champion. I love this track, and I hope we can get some fans to start coming out here and filling these grandstands so we can keep racing here.” Remarked the 37-year-old driver of his #28 Whitman’s Auto Sales / Amor Automotive / Chevrolet. “It’s a really great facility and gorgeous place to race at. It’s really a lot of fun and there’s always passing. We’re going to redo the car this winter and hopefully we can come back here and break our own track record.” The newly crowned champion stated.

After Amor won his fourth consecutive Allstar Performance Fast Qualifier award to end the season, he then drew a four for an inversion which places Josh Timmerman and Fisher Jr., on the front row for the 30-lap main which closed out the entire 2015 racing season for CRA as well as for LOR. From the drop of the green, Fisher Jr., jumped out to the early lead with Amor, who also passed Timmerman, in tow. The pair of black and red #28’s then proceeded to pull away from the rest of the field to battle amongst themselves before Amor started to fade and allow Fisher Jr., to pull away.

Soon, newly crowned 2015 CRA Late Model Sportsman Series Champion, Jason Atkinson began his charge towards the front and was as much as a full straightaway back of Fisher Jr., and Amor. When Amor began to fall off the pace, Atkinson reeled in and then passed Amor for second and would set his sights on Fisher Jr., for the lead. However, with the race going caution free, for just the third time in CRA LMS 11-year history, Atkinson ran out of time as Fisher Jr., would go on to score the victory, becoming the fourth driver in series history to win three in a row at one track.

In addition to the trophy and prize money, Fisher Jr., also collected the AR Bodies Cool Move of the Race award for his drop of the green winning pass on Timmerman. Atkinson’s #7 Oak Motors / Ford finished second to cap off a career season for the 38-year-old driver from New Castle, Indiana. Atkinson, who also won his second straight CRA Street Stock Series Championship the week before during Winchester 400 Weekend, would leave the Circle City with both the Racing Electronics Second to None award as well as the Racing Electronics Hard-Charger award after starting fifth.

Amor’s LOR Stock Car Series Championship year ended with a third place. He also broke the CRA LMS all-time record by winning his fourth consecutive Fast Qualifier award in a row, which broke a three-way tie for that honor. 19-year-old Billy Van Meter posted a fourth place effort in his #23 EDCO Welding / Chevrolet. The Indianapolis, Indiana driver got up to Amor’s back bumper late in the race, but couldn’t make a charge and settled for a fourth place finish. Completing the top five was Timmerman who scored a season high fifth in his #09 Families for Hope / Chevrolet. The 28-year-old led the field to the green flag and the Sheridan, Indiana driver stayed in the top five all race long for the season high finish.

2014 CRA Late Model Sportsman Series Champion, Greg Van Alst finished in sixth position ahead of 18-year-old Jared Thomas who was credited with a seventh place showing. Tony Brutti’s final race as a Rookie resulted in an eighth place effort as Derek Bischak, the 2014 Rumble in Fort Wayne race winner, finished a season high ninth ahead of Reed White who completed the top 10.

Earlier in the afternoon in Allstar Performance Qualifying, Amor set the mark with a lap measured at a 23.149 for his record breaking fourth Fast Qualifier award in a row. Amor is also the Track Record holder and that remains a 22.879 he set earlier this year on April 24th. In the Qualifier Heat Races, Van Meter and Brutti scored the wins.

The 2015 Champion Racing Association Powered by JEGS Awards Banquet will officially close the 2015 racing season on Friday, January 8th, 2016 at the Crowne Plaza Indianapolis Downtown at Union Station in Indianapolis, Indiana. The gala event will honor the champions and top freshman as well as the top 10 teams in final 2015 points from the Vore’s Welding CRA Late Model Sportsman Series Powered by JEGS as well as the ARCA/CRA Super Series Powered by JEGS, the JEGS/CRA All-Stars Tour Presented by Chevrolet Performance and the Stealth Trailers CRA Street Stock Series Powered by JEGS. In addition, the Lucas Oil Raceway Stock Car Series Presented by Visit Hendricks County Champions within the CRA Late Model Sportsman and CRA Street Stocks will also be honored throughout the night.

For more information about the 2015 CRA Awards Banquet as well as the fast approaching 2016 racing season within all four touring series’ of Champion Racing Association Powered by JEGS, go to the series website at: www.cra-racing.com You can also follow along on Facebook at: www.facebook.com/ChampionRacingAssociation and on Twitter at: www.twitter.com/CRAracing.

Salem, IN (October 5, 2018) – Outerwears Performance Products is once again sponsoring the Outerwears Crew Chief of the Year... read more