Drama.  Excitement.  Speed.  Those are three things that race fans have become accustomed to each year when the Champion Racing Association (CRA) hosts its annual SpeedFest event at Crisp Motorsports Park in Cordele, Georgia.  Now, for the second straight year, CRA, Crisp Motorsports Park and Speed51.com are pleased to announce a partnership that will allow fans unable to make it to Georgia the opportunity to experience all of the excitement live on Speed51 TV. 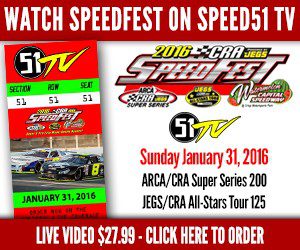 A live pay-per-view broadcast will be available to race fans throughout the world and will give them the opportunity to watch some of the best that Late Model racing has to offer.  Both the 200-lap ARCA/CRA Super Series powered by JEGS Super Late Model main event and the 125-lap JEGS/CRA All-Stars Tour presented by Chevrolet Performance Pro Late Model event will be seen on the live Speed51 TV broadcast.

Those who can’t make it to the Georgia race track on January 31 can purchase the live pay-per-view broadcast for $27.99 now on Speed51.com.

“CRA’s SpeedFest has become the first major event of each new year,” said CRA Managing Partner R.J. Scott.  “There is no better experience than being at the track and experiencing the great southern Georgia hospitality, but for those that can’t make it, being live on Speed51 TV helps fans get to see some of the nation’s top racers, and all the racers get the national, live exposure they deserve.”

After officials reviewed video footage, Nemechek was penalized and 2015 Snowball Derby winner Chase Elliott inherited the lead before pulling away for his third career win in the race.

“As a fan of Late Model racing it’s hard to come up with an event that provides more bang for your buck than SpeedFest,” said Brandon Paul, Speed51.com Editor.  “Each year the excitement level seems to rise, whether it’s Chase Elliott versus Johnny Sauter or Bubba Pollard versus John Hunter Nemechek, it always gets exciting at the end of these races.  Having a partnership with CRA and Crisp Motorsports Park that allows live broadcasting of this event is a great asset for short track racing fans throughout the world.”

The live broadcast will begin on Sunday, January 31 at 1:30 p.m. ET and will include driver introductions, as well as Last Chance Races (if needed).  All of that will lead up to the pair of Late Model features that will have fans everywhere glued to their TV or computer screens.  The 125-lap feature for the JEGS/CRA All-Stars Tour will set the stage for the 200-lap main event for the ARCA/CRA Super Series.

Fans hoping to follow along with the action leading up to the live broadcast of the SpeedFest features can do so by tuning into Speed51.com’s Trackside Now coverage.  You can follow the coverage throughout the weekend beginning Friday afternoon for practice results, qualifying results and the latest news and information from SpeedFest 2016.