Salem, IN (April 17, 2016) – 20 year old Cody Coughlin powered his way to the front to get his second career ARCA/CRA Super Series Powered by JEGS victory on Saturday afternoon at Toledo Speedway. Coughlin’s win comes in just his second race with new crew chief Jack Smith, a three time winner with the JEGS/CRA All-Stars Tour last season. Coughlin passed Chad Finley for second, then powered by two time defending event winner Brian Campbell on lap 65 to take the lead, then fought off Finley again on a restart on lap 72 to get the win.

“This win just feels great,” remarked an excited Coughlin in victory lane. “We struggled at the beginning of the year 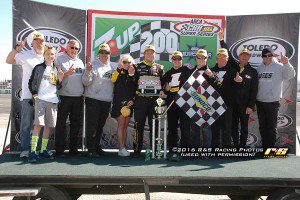 and we decided to make a couple changes and brought Jack Smith on. He and my team have really worked great
together and so have I. This gives me a huge confidence boost. In my first ARCA/CRA Super Series win at Winchester in 2014, I lead every lap, so now I know I can pass cars to win and race with proven racers like Chad Finley and Brian Campbell. I want to thank my crew and my family for this great opportunity I have to race!”

Saturday’s 7-UP 200 featured the 100 lap ARCA/CRA Super Series and ARCA Midwest Tour event and a 100 lap ARCA Gold Cup Outlaw Late Model event that was won by veteran racer Steve Needles on a gorgeous spring afternoon in front of a great crowd of race fans.

Finley battled Coughlin for several laps on the lap 72 restart after the events only yellow came out when Campbell spun in turn three hitting the foam barriers and wall very hard. Campbell was running second at the time but lost his brakes coming into the turn. Campbell walked away from the hard hit, but the car was heavily damaged. Finley would go on to finish second.

The next ARCA/CRA Super Series event will be on Saturday, May 7th at Anderson Speedway. More information on all the CRA Series is available at www.cra-racing.com.

It’s time to sharpen your pencils and vote now for this year’s Champion Racing Association powered by JEGS (CRA) Most Popular... read more

Special from Speed51.com - More and more dates continue to get added to the growing Summer Thunder TV presented by... read more

The Sanctioning Bodies, Tracks and Special Events listed below would like to inform all asphalt short track Late Model competitors... read more

A few early cautions marred the start of Tuesday’s return to racing at New Smyrna Speedway, but Harrison Burton was able to... read more