2016 to be Another Busy Season for Jacobs Racing

Jacobs Racing Story – After three full seasons of racing with the JEGS/CRA All Stars Tour, pro late model drivers Marc and Jaxson Jacobs, along with their 16-year-old sister Paighton, will field entries full-time at Delaware Speedway for the three late-model triple crown events as well as part-time schedules in both the APC United Late Model Series and JEGS CRA All-Stars Tour in 2016.  The siblings return to competition this summer with the backing of Corus Entertainment London, with London’s Best Rock FM96 and Country 104 to once again be featured on the cars, along with sponsorship from Rocky’s Harley Davidson, Kitchener Harley Davidson, Raymond Brothers Tents and Awnings, RG Gibson and Sons Hardwood Flooring, and Allstar Performance.

Since 2012, Marc, now 23, and Jaxson, now 18, have been racing against some of the premier pro late model talent in the mid-West, competing against the likes of Erik Jones, Chase Elliot, John Hunter Nemechek, and Dalton Armstrong.  In those three seasons, the brothers have toured to 12 different racetracks in 4 different states, for 65 total races between the duo, which is not including the pair of World Series of Asphalt starts in New Smyrna Beach, Florida that they have each made in that time.  Jaxson was voted as the 2013 JEGS/CRA All Stars Tour “Most Popular Driver” presented by Speed51.com, while Marc won the same award in 2014, in addition to being named the 2015 “Sportsman of the Year” for the tour.

“We gained a lot of knowledge running with those guys and on those tracks”, exclaims Marc.  “I know I’m a better racecar driver for having run that tour, and I know my team has come a long way over the past three seasons in regards to preparing the cars for different tracks and adjusting to different conditions and different challenges as race weekends play out.  I’m really excited to race in Ontario again, of course.  I’m looking forward to seeing what we can do, and hopefully we can have strong and consistent runs with this FM96 car.”

“Those were the three most fun seasons I’ve raced in my career”, added Jaxson, a first year sport media student at Toronto’s Ryerson University.  “To have the opportunity to race at tracks like Winchester and I-44 against top level talent was awesome.  Any time you compete against that caliber of competition, you’re more or less forced to step up your own game, so I’m excited to bring that experience back home and race in front of my home town crowd again as well as continuing to get batter down South with the CRA, and hopefully we can put the Country 104, Rocky’s Harley-Davidson car at the front of the field.  Glenn Luckett, Eddie Chew and everyone at the CRA were true professionals, and the experience we gained racing with the CRA is something that I believe will be an asset to our team moving forward.”

In addition to Marc and Jaxson’s pro late model teams, 16-year-old Paighton Jacobs will also make the jump to pro late model competition, just as her brothers did before her.  A stand out in Delaware Speedway’s Krown Junior Racing League, Paighton will be looking for seat time and experience this season, driving her Country 104 sponsored entry.  “I’m thrilled to have this opportunity”, says Paighton, a grade 10 student in London, Ontario.  “I’ve spent the last four years spotting for Marc at tracks all over the map, and I’ve been around this sport my entire life, so this is really the division that has been my goal to eventually compete in.  It’s really exciting to be racing for Country 104 in 2016.  Corus Entertainment and Rocky’s Harley-Davidson have been such great partners for our team, and I’m looking forward to representing them on and off the track again this season.”  Paighton has already been logging laps in her brothers’ cars in preparation for the coming race season, and has set realistic goals for herself: “I just want to finish every lap and bring the car home in one piece every night.  This season is all about learning and gaining experience, and I couldn’t be more excited to get started.” 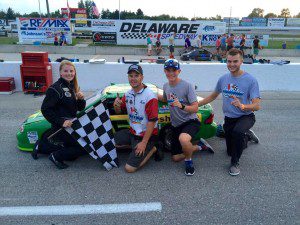 In addition to the three pro-late model teams, Jacobs Racing will also field a Krown Junior Racing League entry for Shane Jacobs, who will make the jump to the senior division this season.  Coming off a strong season in which he took home the inaugural “Junior Charger” division championship as well as the prestigious “Classroom Achievement” award and runner-up in the overall junior division point standings, Shane, who will soon turn 13 years old, will chase down the “Rookie of the Year” honours in his new division, piloting his familiar #3 Rocky’s Harley-Davidson, Raymond Brothers Tents and Awnings car.

Jacobs Racing is always looking for marketing partners.  If you or your company are interested in advertising with Jacobs Racing in 2016, please email either marcj1993@gmail.com or ken@raymondbrothers.ca to find out how sponsorship will benefit you!  We would be proud to represent you on and off the track in 2016!  Be sure to check out jacobsracing.ca, and follow @Jacobs_Racing on twitter for more information throughout the 2016 season.

Event Information - Entry List Salem, Indiana (Wednesday, July 1, 2015): After over a month off because of weather, the JEGS/CRA All-Stars... read more