Salem, IN (April 24, 2016) – Anderson, Indiana driver Josh Poore had a dominating performance in getting the win Saturday night in the Shadybowl 200 CRA Street Stocks Powered by JEGS event at Shadybowl Speedway. Poore worked his way to the front of the field from his fifth place inverted starting position to take the lead from Jacob Muncy on lap 51 and lead the final 149 laps to get the win in the first CRA Street Stock Triple Crown Series event of the 2016 season. The win did not come easy, Poore had to fight through several restarts and hold off the challenges of Jason Atkinson and Ryan Amonett before pulling away on the last restart to get the win.

“This was a great win for my team,” remarked Poore. “We had a great car all day, but it wasn’t easy there were some tough battles with all the restarts but we managed to get away with the lead each time.”

Poore, the 2014 winner of the Shadybowl 200, was the fastest car in practice, then set time fast time in Allstar Performance qualifying, drawing a five for the invert. Saturday was Poore’s first start of the season with the CRA Street Stocks as he looks to challenge for the CRA Street Stock Triple Crown Series Championship this season.

Atkinson, the two time defending CRA Street Stock Triple Crown Series Champion, finished second after a tough battle with Amonett. Amonett would hold on to finish in third place. Brett Hudson would finish in fourth. Series points leader Jeff Lane would come from two laps down after a flat tire right before the halfway break to race back to get a fifth place finish and keep his points lead. 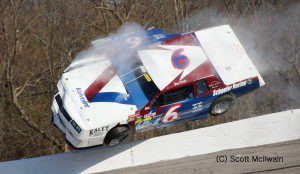 Series rookie Bryce Schaefer had a spectacular crash in qualifying when his throttle stuck after taking the white flag
on his second qualifying lap. Schaefer would hit the turn one wall hard, then launch over the wall and into a series of barrel roles before landing hard just outside the pit road exit to the track in turn two. Schaefer would walk away from the crash, but his car was destroyed.

A total of 30 cars attended the event Saturday, with 27 cars taking the green flag. A total of 10 cars finished on the lead lap.

First Timers Bonuses will also be Available for CRA Support Divisions Salem, IN (September 15, 2016) - Two of the year’s... read more