JVM Racing – Twelve years ago circumstances allowed JVM Racing owner Jeff Miller to reach out to 7 Time ASA National Champion Mike Eddy to drive for him in the 2004 ASA scheduled events. The two had talked about getting together several times in previous years but until then had not found the timing to be right. It WAS the right time finally!! In only their 3rd race together, they put on quite the clinic in how to beat one of the strongest fields of Drivers in ASA history. It was an awesome display of driving talent in the very potent, and tested, Howe stock car at Berlin Raceway in Marne, Mi. The friendship, business relationship, and Racing Team were perfected and along with both parties involvement with Howe Racing Enterprises, it jelled into a threat to win everywhere they went. Unfortunately, ASA went away and Mike had won his last race as a driver! 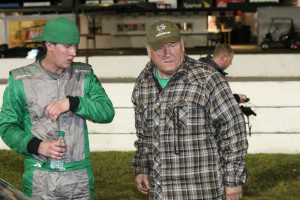 Three short years later, Mike again went racing, only as a Crew Chief for his 17 year old Son, Travis Eddy in a Howe Modified, traveling around to the Michigan area short tracks. That first year of ever racing produced 2 Wins, 17 Top 5’s, and 17 Poles in just 28 races, a Track Championship, and a 2nd place finish in another Tracks Points! To say this young man was hot on the heels of Mike Eddy-like statistics is an understatement! As in the next 7 years, Travis has assembled quite the resume in the tough Modified racing world. Since that time Travis has won an amazing 45 Features, had 187 Top 5’s, 106 Poles, and 3 more Championships, even though he mostly bounced around from track to track, along with several different Modified Series, and Special Events in several States. Being very versatile, Travis has won races at 11 different Tracks in his Modified, and also had great runs in a few Outlaw Super Late Model and JEGS/CRA All-Stars Tour events. At only 26 years old he has already ran 264 events in his young career.

For 2016, the JVM Racing Team is excited to announce that Travis Eddy will pilot the Howe Racing, Jason Dietsch Trailer Sales, Sizzle Marine, Penske Shocks Dodge for the entire JEGS/CRA All-Stars Tour schedule, and will compete for both the Championship and the Rookie of the Year Title, as well as run a few ARCA/CRA Super Series events!! With an already well-established relationship, Miller, and his partner Nelson Kohman, welcome the chance to showcase the tremendous talents of Travis Eddy. With the full support of Howe Racing’s Chas Howe and Dick Van Wieren, Mike Eddy, Matt Eddy, Chris Stearns, Keith Freeman, Carole Coey, Chad and Pam Hartzell, and Nick Hale will see to it that Travis has all he needs to be competitive in his run for the JEGS/CRA All-Stars Tour Title. Along with longtime sponsors Sizzle Marine, and Jason Dietsch Trailer Sales, JVM Racing can’t wait to get to the Cabin Fever 100 this weekend at Springport Motor Speedway.

Also in 2016, JVM Racing will compete for another NASCAR Whelen All American Late Model Championship at Columbus Motor Speedway in another Howe 101 Late Model with 22 year old, former Late Model and Modified Champion David Carter Jr. behind the wheel. As Travis Eddy’s Teammate, David will also compete in a few JEGS/CRA All-Stars Tour and ARCA/CRA Super Series events as well. It will be a lot of fun with both drivers, especially when June 25th rolls around, at CMS where JVM Enterprises will again promote the final Bud St. Amant Memorial 125 ARCA/CRA Super Series race. Stay tuned for some more exciting news about this Event! It will be an exciting year for sure at JVM Racing!