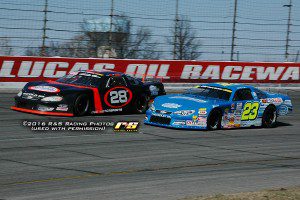 “That was a great race, TJ (Fisher Jr.) was a lot better than me off the turns so I knew I was going to have to drive it in their real hard to have a chance to get under him and make the pass,” remarked Van Meter. “I did go up the track a little and touched him, I apologize for that, it wasn’t anything intentional, just hard racing. I want to thank all my wife, crew and sponsors for their support in helping me get this win!”

Fisher and Van Meter battled through out the second half of the race for first place, with some very exciting passes as they worked their way through the field, putting on an exciting race for the fans. Fisher would end up in second after trying to get to Van Meter’s bumper coming off turn four coming ot the checkered flag. Rookie Brandon Barcus came home in third. Allstar Performance Fast Qualifier Shawn Amor finished fourth, with Keith Lyons coming from the back of the field after a lap 2 yellow flag to finish one lap down in fifth place.