Salem, IN (May 11, 2016) – The CRA Street Stocks Powered by JEGS will be back in action this Saturday at Anderson Speedway located in Anderson, IN, in the first of five series events at the fast quarter mile. Last year, Jason Atkinson got two wins at Anderson on his way to claiming the 2015 series Championship, Robert Amos Jr. and Josh Poore picked up one win a piece at Anderson in 2015.

Saturday’s event will be the fourth point’s event of the season for the series that started off with veteran CRA competitor Jeff Lane getting the win in the Cabin Fever event on April 3rd at Lucas Oil Raceway. Josh Poore went to victory lane at Shadybowl Speedway on April 23rd in the series first Triple Crown event of the season. Austin Coe came from his 17th place starting position to get the series win last Friday night at Lucas Oil Raceway.

Pit Gates open on Saturday at 3:00pm. Practice is set to begin at 5pm with qualifying at 6:30pm. The race program will begin at 8pm and will include a 75 lap feature for the CRA Street Stocks. Also in action will be the Anderson Marcum Welding Pro Compacts and Legends.

More event and track information is available at www.andersonspeedway.com. For more information on all the CRA series go to www.cra-racing.com.

Special from Racing America - This weekend, it will be time for Super Late Models to take center stage at... read more 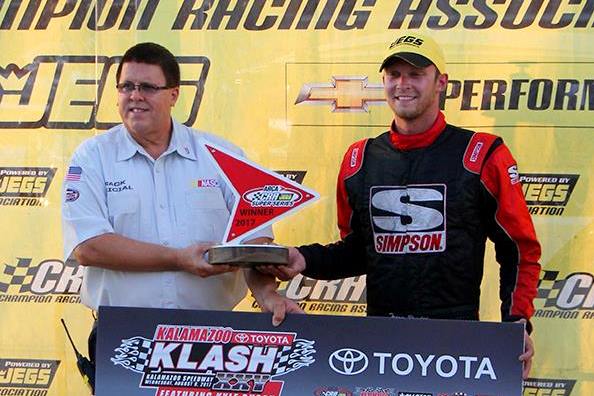 Salem, IN. (April 14, 2016) – Champion Racing Association Powered by JEGS officials have released the entry form for the... read more

Several Special Awards on the Line at CRA SpeedFest 2020

Salem, IN (January 22, 2020) – Champion Racing Association Powered by JEGS officials have announced there will be several special... read more