Salem, IN (July 23, 2016) – NASCAR Xfinity Series racer Erik Jones took an evening off from his NASCAR commitments at Indianapolis Motor Speedway to make a rare start in his ARCA/CRA Super Series Powered by JEGS late model and showed he still knows how to wheel a late model around Lucas Oil Raceway by getting the win in Friday’s Circle City 100 Presented by CSX Play It Safe. Jones, the 2011 JEGS/CRA All-Stars Tour Champion, was the 2015 NASCAR Camping World Truck Series Champion and is the current point’s leader with the NASCAR Xfinity Series heading into this weekend’s NASCAR events with the Brickyard 400.

Jones won the Battle at Berlin 251 at Berlin Raceway on June 13th, and finished second to Matt Kenseth Tuesday at the Slinger Nationals in his only late model starts this season, but there was no denying him Friday night with Jones racing defending event winner John Hunter Nemechek for the lead in the middle of the race then having to hold off the challenges of former Lucas Oil Raceway series winner Brian Campbell to get the win.

“This feels great to win at Lucas Oil Raceway,” remarked Jones in victory lane. “I have to thank my whole crew, the car wasn’t great in yesterday’s open practice, but they worked on it today and made it right. This is a great way to start our weekend here in Indianapolis, hopefully we can carry the momentum over to the big track on Saturday!”

Stephen Wallace took the early lead from his pole starting position after EDCO Welding Fast Qualifier Nemechek drew a 10 for the invert. Nemechek wasted little time in working his way to the front along with Jones who started ninth. Nemechek got by Wallace on lap 34, Jones followed to take second. Nemechek open up a pretty good lead before a yellow flag flew for a spinning car. On the next restart Jones was able to power by to get the lead on lap 51. Nemechek was right behind Jones in second looking to make another challenge for the lead when he was forced to the pits on lap 68 after losing power from a dead battery. Jones would then hold off Campbell to get the win.

Campbell would finish in second and received the Fluidyne Cool Under Pressure Award and the Sweet Move of the Race Award for several passes almost in the grass coming out of turn four. Rapheal Lessard finished in third in his series and Lucas Oil Raceway debut, while teammate Todd Gilliland drove from his 20th place starting position to finish fourth earning a Hoosier Performance Award and the Hamner Racing Engines Hardcharger Award. 2015 series Champion Grant Quinlan finished in fifth.

Tanner Thorson earned a Hoosier Performance Award coming from his 24th starting position in his stock car and series debut to finish in 10th. Dalton Armstrong was the Senneker Performance Rookie of the Race Award winner.

The next ARCA/CRA Super Series event will be Wednesday, August 10th at Kalamazoo Speedway the Kalamazoo Klash 125. More information on all the CRA Series is available at www.cra-racing.com. 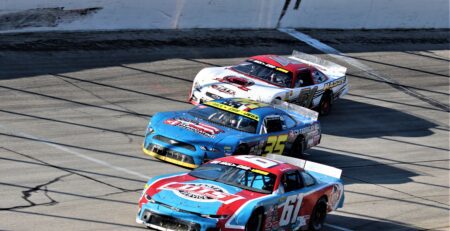 Winchester 400 Pole Day to Be Presented by Vores

Special from Speed51.com - Saturday, October 10 will be a big day for Winchester 400 competitors, as they will qualify... read more

Special from Speed51.com - This weekend, many of the top Super Late Model drivers in the nation head to Bristol... read more