Cook led the first 60 laps before he was passed by Eddie Van Meter, looking for his fourth win of the year at Anderson Speedway. Cook was passed for the second spot by Allstar Performance fast qualifier Jeff Marcum on lap 61 and the battle for the lead was on in full force.

On lap 64 Marcum got inside of Van Meter coming off the fourth corner and the two drivers tangled bringing out the caution flag. Both drivers were sent to the tail of the lead lap cars. Van Meter limped to the finish with a tire going down placing 8th and Marcum was able to continue in competition. For Marcum it was the second time he had to come from the back of the pack toward the front having spun on lap 15 following contact with Billy Van Meter. That put Cook back on the point and he held off Danny Trent to win by four-tenths of a second with Steven Woods, Tony Brutti and Marcum rounding out the top five.

“This is one of my favorite tracks, but I never seem to have any luck here,” Cook said. “I’m at Anderson, in a CRA race and I’m the winner.”

Cook said it was fun racing with Van Meter for more than 40 laps for the point.

“I knew Eddie would race me clean,” he said.

Fans on Herald Bulletin night at the races were treated to some great side by side racing action behind Cook with several drivers looking to move to the front.

Wes Russell and Billy Van Meter brought out the red flag on lap 55 when it appeared Van Meter got into the back of Russell’s car and both made heavy contact with the turn three retaining wall. Both drivers were uninjured, but the track was red for a lengthy clean up.

Marcum set a new track record during qualifying turning the quarter-mile high banked oval in 12.674-seconds, breaking the mark of 12.736-seconds he set on July 2. 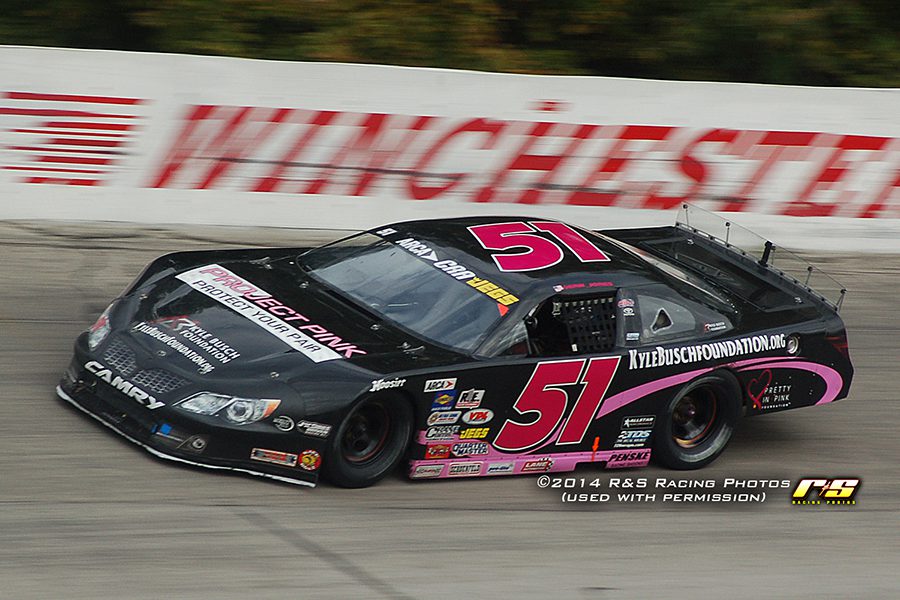 Today is the first points race of the 2018 season for the ARCA/CRA Super Series presented by Chevrolet Performance. The... read more

Salem, IN (September 5, 2016) – Knightstown, Indiana native Colby Lane figured he was going to finish in third until... read more

Salem, IN. (September 22, 2016) – The JEGS/CRA All-Stars Tour Presented by Chevrolet Performance will return to action this weekend... read more