Salem, IN. (September 8, 2016) – The JEGS/CRA All-Stars Tour Presented by Chevrolet Performance will return to action this Saturday at the racy Owosso Speedway, located in Owosso, Michigan. Saturday’s event will be the fourth ever event for the series at Owosso Speedway, past winners include Chad Finley in 2014, Brian Campbell in 2012 and Erik Jones in 2011. Last season’s event was canceled because of weather.

The JEGS/CRA All-Stars Tour events at Owosso Speedway are always exciting with plenty of passing and side by side racing action with the tracks progressive banking. A total of 29 cars are already entered for Saturday night’s event, with a very talented group of drivers.

As previously announced up and coming NASCAR competitor Erik Jones has filed an entry to race in Saturday’s Big O Classic 100 Presented by JEGS.com. Jones was the inaugural series Champion in 2011 before starting his assent to the upper NASCAR ranks, which includes a Championship in the NASCAR Camping World Truck series last season. Jones is racing full-time with the NASCAR Xfinity Series this season for Joe Gibbs Racing, where he is sixth in points and leading the series with three wins so far this season. He sits first in the NASCAR XFINITY Series Chase Grid. Jones will pilot the #77 5 Hour Energy Toyota Camry next season with the NASCAR Sprint Cup Series for Furniture Row Racing.

Series point’s leader Cody Coughlin, the series 2013 Champion, tops the list of CRA regulars entered for Saturday’s event. Coughlin has two series wins so far this season including Salem Speedway on June 18th and Anderson Speedway on July 23rd. Coughlin is also the points leader in the ARCA/CRA Super Series were he has a series leading four wins so far this season. Coughlin is also competing in selected NASCAR Camping World Truck Series events during the 2016 season for Kyle Busch Motorsports.

Pits open on Saturday at 12noon. The first of two practice sessions for the JEGS/CRA All-Stars Tour will begin at 2:30pm. Boyne Machine Company Qualifying will take place starting at 6:15pm. The racing program will begin at 7pm. There will be an on track autograph session with all the JEGS/CRA All-Stars Tour drivers prior to the running of the Big O Classic 100 Presented by JEGS.com.

Salem, IN (December 17, 2021) – Champion Racing Association Powered by JEGS officials have released the 2022 schedule for the... read more 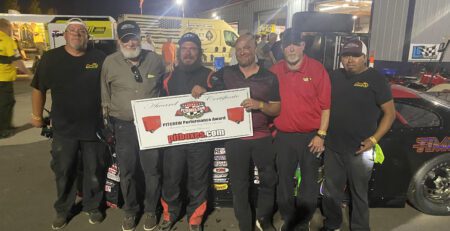