Salem, IN (October 10, 2016) – The Winchester 400 is a grueling 400 lap event that tests drivers and their equipment but Sunday’s 45th Annual Winchester 400 on the famed High Banks of Winchester Speedway will mainly be remembered for the last five laps that saw a driver that went from looking like he was out of contention to victory lane. Those final laps and the win did not come without a lot of controversy.

The wild finish started when second place running Stephen Nasse got into leader Raphael Lessard, Lessard then got back into Nasse slowing both cars and allowing Dalton Sargeant to dive low underneath both cars. Sargeant and Nasse made contact resulting in Nasse making hard contact into the wall and collecting Lessard, ending both drivers days on lap 395. Sargeant was sent to the tail of the lead lap cars for being involved in the yellow setting up the dramatic five lap finish.

During the red flag while the track crew cleaned up the Nasse and Lessard wreck, two-time ARCA/CRA Super Series Champion Travis Braden’s car was pushed to pit road, unable to start because of a dead battery. The crew frantically went to work and managed to get the battery changed and get Braden back on the track just before the restart. The lap cars at the back of the field all waved Braden by, giving Braden the opportunity to start at the tail of the four remaining cars on the lead lap.

2016 Vore’s Welding CRA Late Model Sportsman Champion Eddie Van Meter had inherited the lead for the restart with 2016 Senneker Performance Rookie of the Year Dalton Armstrong in second. Sargeant was in third and Braden in fourth. Van Meter jumped to the lead while the other three battled behind him. Van Meter pulled out to a three car lead with Armstrong and Braden battling behind him. Braden caught Armstrong in turn three and made a daring pass on the bottom making contact with Armstrong and getting the second position. Braden set his sights on trying to run down Van Meter. Van Meter took the white flag and looked to be on his way to getting the biggest victory of his career until Braden caught and passed Van Meter in turn two after more contact. From there Braden got the biggest late model win of his career.

“It’s a miracle that I’m standing here in victory lane, “remarked Braden. “The battery was going dead there at the end, we got lucky that those guys wrecked and caused the red flag and we could get the battery changed. We rode around a lot in the middle of the race and decided to save our tires until late in the race. That strategy paid off, I had better tires than anyone else on that last restart and just did what I had to do to get the win, any other driver would have done the same thing.” 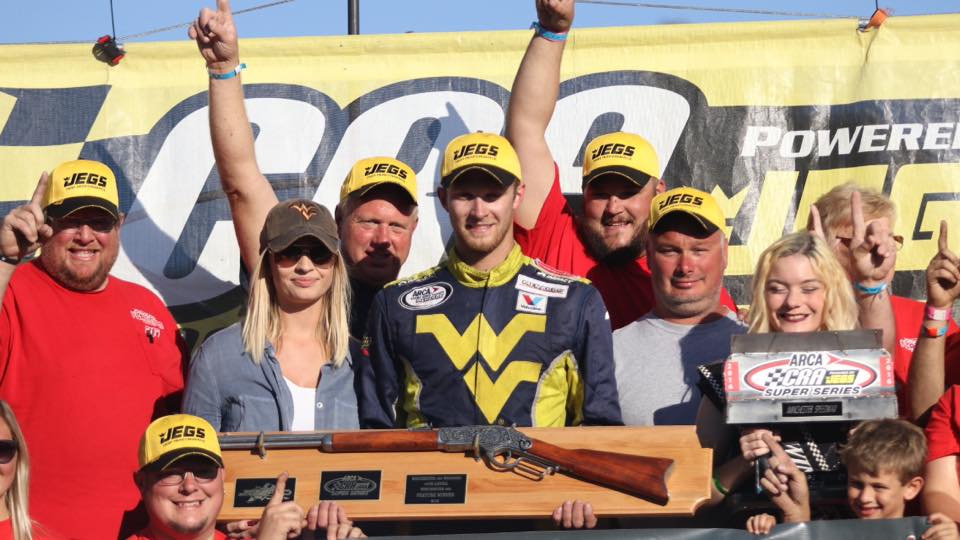 Tempers flared in victory lane after the race first between Van Meter’s crew and Braden’s crew, then Armstrong’s crew also joined in, showing how bad teams want to win the famed Winchester Rifle Trophy traditionally awarded to the winner of the Winchester 400.

Braden added, “I have to thank this entire Platinum Motorsports team, they worked there butt’s off to give me the chance to get this win, I’m just the lucky guy who gets to sit behind the wheel. To get this win and Friday night’s win in the JEGS/CRA All-Stars Tour race at this race track is awesome!”

For their efforts on pit road Braden’s crew picked up the PitBoxes.com Pit Crew of the Race Award. Braden came from his 15th place starting position to get the win picking up a Hoosier Racing Tire Performance Award and the Hamner Racing Engines Hardcharger Award and getting a Fury Race Cars Lap leader Bonus for leading lap 400.

Van Meter had never finished higher then eighth in his previous nine Winchester 400 starts, but with the help of two Lucky Dog Free Passes, Van Meter was able to be up front for the wild finish.

“He door slammed me pretty good there to make the pass, but at the 400 probably anybody would have to, but it’s still heartbreaking,” remarked Van Meter.  “That’s racing, tempers flare, and there will be another day.  All the crew worked real hard, we had great support from our sponsors, we’re just blessed to be able to come here and run second.”

Van Meter would pick up the Fluidyne High Performance Cool Under Pressure Award for being able to race his way to the front and be in position to get his second place finish. Van Meter also picked up $100 in lap Leader bonus money.

Armstrong would finish in fourth place, he picked up the Senneker Performance Rookie of the Race Award and the AR Bodies Cool Move of the Race Award for his save after contact from Braden. Armstrong was the JEGS/CRA $100,000 Super Late Model Triple Crown Points Champion, earning a $5000 bonus for that title. Armstrong had already locked up the 2016 Senneker Performance Rookie of the Year prior to the race. Armstrong finished second the ARCA/CRA Super Series Championship points.

Cody Coughlin would finish in fifth place and claim his first ARCA/CRA Super Series Powered by JEGS Championship. Coughlin persevered through a rough day to get the top five finish and the Championship. First loose lug nuts created a bad vibration which cost him a lot of spots in the running order after the first pit stops after leading the event from lap 21 to lap 46. Then contact from another car put him hard into the turn four wall causing a lot of damage to the right side of the car. Coughlin was able to bring it home and claim his Championship, becoming the only driver to win that Championship and the JEGS/CRA All-Stars Tour Championship in the same season.

“I really wanted to win the 400, I thought we had the car to get it done, but I realized quickly that wasn’t going to happen,” remarked Coughlin.  “We looked at the big picture and did what we deeded to do to win the Championship.  I am so proud of my crew and how hard they worked. I also have to thank my family for their great support. My goal was to be the first to win the two top CRA Championships in the same season and we did it!”

Coughlin picked up the Sweet Move of the Race Award for his top five finish working through the issues to secure the Championship. Coughlin also received $650 lap leader bonus money.

Salem, IN (August 31, 2018) – The Lawrence Towing CRA Street Stocks Powered by JEGS will begin its Chase for... read more