Lorz Motorsports (October 17, 2016) – After finishing sixth in 2015 Driver Points with the JEGS/CRA All-Stars Tour Presented by Chevrolet Performance and second in VanDoorn Racing Development Rookie of the Year points, 17 year old Austin Kunert had some pretty high expectations for the 2016 season with his Lorz Motorsports Team, part of those expectations was the addition of veteran JEGS/CRA All-Stars Tour competitor Josh Nelms to the team for the 2016 season.

The team came away with a respectable 18th place finish on the lead lap in the series season opening Masters of the Pro’s 144 at Lebanon I-44 Speedway, an event that not only attracts the best of CRA, but also some of the top late model drivers around the country, plus several talented local racers. The bond between Nelms and Kunert was starting to work.

The series then went to Berlin Raceway with a huge field of 38 competitors at one of the toughest tracks on the series schedule. Kunert qualified 17th out of the 38 competitors, making the 100 lap main event were he again came away with a respectable 17th place finish, one lap down.

The series then headed to the High Banks of Salem Speedway were bad luck would rear its ugly head, Kunert was caught up in a lap 61 incident when another competitor hit the wall in turns three and four leaving Kunert with no place to go. The car suffered heavy damage and they were done for the night with what would be his worse finish of the season.

The team headed to Anderson Speedway for the series next event with high hopes of turning around their season and they did just that. After a 15th place qualifying position, Kunert charged through the field to finish in fifth place, his first ever top five finish with the series, attributing the great finish to a great performance by his team and having Nelms on the radio with him helping survive the fast quarter mile track from the spotters stand.

From there the team headed for their first ever visit to Spitzer Motor Speedway for the Bud St. Amant Memorial 125 with another stellar field of competitors on hand. Kunert qualified ninth and was able to bring home a seventh place, his second consecutive top 10 finish with the series.

The High Banks of Winchester Speedway on Labor Day Weekend was next, and again the team put forth a great effort with Kunert qualifying sixth and coming home with a sixth place finish, his third consecutive top 10 finish, and looking forward to coming back to race there on Winchester 400 Weekend.

Another new track was on the agenda next, when the team headed to Owosso Speedway. The event was canceled because of rain in 2015, so this would be Kunert’s first time racing at that venue. Another talented group of racers were on hand for this event, many with lots of experience at Owosso including NASCAR Xfinity Series racer Erik Jones, the 2011 JEGS/CRA All-Stars Toru Champion. Kunert would survive the battle that ensued on the track throughout the event, including 13 caution periods, to come away with an eighth place finish, his fourth consecutive top 10 finish. With the finish Kunert had also moved into third place in series points with only two events left in the 2016 season.

The famed Lucas Oil Raceway was up next for the team. Kunert’s day started off with a great third place qualifying run out of the strong field of 29 cars on hand. Kunert was running in the top 10 when the he had to come to pit road with a tire going down as the field was coming to green after a caution. The team lost three laps while changing the tire under green, but Kunert still came away with a 15th place finish, but ended the string of top ten finishes. The finish dropped Kunert to fourth in series points with only one event left in the 2016 season. 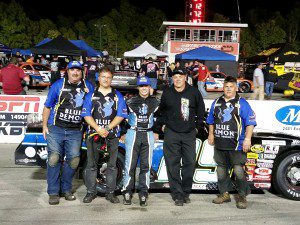 The Season Championship event at Winchester Speedway was up next as Kunert and the Lorz Motorsports Team looked to close out the season on a high note. Kunert timed in at eighth place in qualifying out of the 26 cars that took time, with the invert, Kunert would start outside pole to Labor Day Weekend event winner Brandon Oakley. Oakley would get the jump and take the early lead. Kunert set his sights on maintaining a top five finish. Kunert would avoid some early trouble several front runners had and continue to battle up front. Race winner Travis Braden would make a pass of Kunert and race leader Cody Coughlin to take the lead on lap 55. Kunert would follow Braden across the finish line with a career best second place finish. With that finish, Kunert would also move up to finish second in series points behind Champion Coughlin, just two points ahead of third place finishing Oakley.

“I felt like I did really good this season, a lot better than last year,” remarked Kunert. “And as a team, the Lorz Motorsports Team did a lot better also. Bringing in Josh Nelms with our program was an amazing decision. He helped me as a driver and mostly with my feedback. I was hoping to do a little better in the beginning of season but we recovered from that. To the middle and the end of the season I felt the crew and myself really figured out how to communicate as a team.”

Kunert added “I felt like I improved the most in feedback to my crew, learning how to really understand the car and to be very specific at each point through the apex of the corners, to let them know what the car needed to be better. The competition in this series continues to get tougher each season, it was a lot stronger than last year, you have to have a great effort from the team and the driver to be competitive each race. I was hoping to win a race this past season, but we will get one next year and hopefully win the championship.”

“I have to thank everyone with Lorz Motorsports, those guys really put forth the effort each race,” added Kunert. “I have to thank Josh Nelms for all his help. I want to thank VanDoorn Racing Development for the shocks and great set up help they gave us. I have to thank all our great sponsors including Blue Demon Welding Products, Kings Express, Custom Companies, Global Builders, Prince Industries, Lechler Inc., BrakeOmeter, PFC, Swift Springs and McGunegill Engine Performance, none of this would be possible without their support. I also have to thank my family for giving me this great opportunity.” 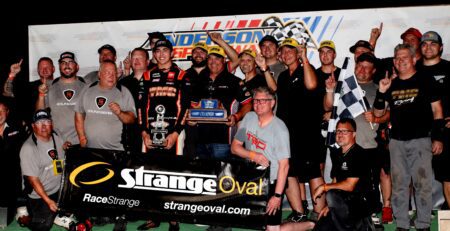