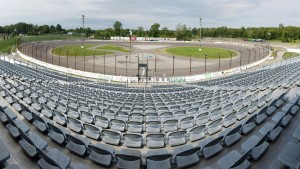 The stock-bodied ARCA/CRA machines return to “The Rock” for their traditional 125 lap feature, while the track’s ARCA outlaw-bodied Late Models will hit the track for a 75 lap main event.

The addition of the 75 lap contest for Flat Rock’s Late Models now gives the division an unofficial “Triple Crown”-the Joy Fair Memorial 100, set for Saturday, May 27; the Stan Yee Memorial 150 on Saturday, July 22 and the 75 lap race just added to the 2017 slate of events.

Flat Rock will open its 65th consecutive season of racing Saturday evening, April 29.  3 classes of cars will once again be featured-the ARCA Late Models, Figure 8’s and Street Stocks.  The same 3 divisions have competed at the track yearly since 1977.  The pre-season practice at Flat Rock is set for Saturday, April 15.

The complete 2017 schedule for both Flat Rock and Toledo Speedways will be released in mid-December.

Welcome to the famed Lucas Oil Raceway in Indianapolis, Indiana for the 2016 Wish For Our Heroes CRA Fall Brawl.... read more