DuroByte Motorsports Story – (December 8, 2016): DuroByte Motorsports is pleased to announce that they have signed 14 year old Ortonville, Michigan teenager Michael Clancy Jr. to compete for the 2017 JEGS/CRA All-Stars Tour Presented by Chevrolet Performance Championship. At 13 years old during the 2016 racing season, Clancy Jr. was the youngest regular competitor with the series this past season. Clancy Jr. started off the season by winning the JEGS Challenge non-qualifiers feature as part of the big Masters of the Pro’s 144 event at Lebanon I-44 Speedway. Clancy Jr. went on to get three top ten finishes during the season, with a top finish of sixth twice, once on the High Banks of Salem Speedway and at the tough quarter mile of Anderson Speedway. Clancy Jr. finished 7th in final series Driver Points and was second in VanDoorn Racing Development Rookie of the Year points. 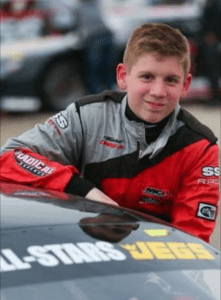 “I feel honored to be selected by DuroByte Motorsports, they are very professional and represent everything we stand for,” remarked Clancy Jr. “I learned so much racing last year and I have a lot of confidence going into the 2017 race season. With as hard as the team and I are working in the preseason, I am excited for what this year has in store for us. Everyone always says hard work pays off, well I’m hoping this year it pays off in the form of a JEGS/CRA All-Stars Tour Championship.”

DuroByte Motorsports, owned by Murray Van Wieringen and spear headed by crew chief Jimmy D Smith, has a proud history of fielding competitive racecars with the JEGS/CRA All-Stars Tour and ARCA/CRA Super Series since the 2013 season.  DuroByte Motorsports has fielded cars for current NASCAR K&N Pro East Series competitor Dominique Van Wieringen, her younger brother Tristan Van Wieringen and Kody Evans. Some highlights for the team since the 2013 season include Dominique becoming the first female JEGS/CRA All-Stars Tour winner at Lucas Oil Raceway in her rookie 2013 season, she came within a lap of getting a second victory at Winchester Speedway that same season. Second and third place finishes by the siblings during the 2014 season at the famed Milwaukee Mile. Tristan got his best series all time finish of second at Lucas Oil Raceway during the 2015 season. Tristan was the Boyne Machine Company Fast Qualifier in three JEGS/CRA All-Stars Tour events during the 2016 season.

“We at DuroByte Motorsports are thrilled to have Michael Clancy Jr. join our team for the 2017 JEGS/CRA All-Stars Tour season,” remarked Murray Van Wieringen. “He is a very talented young man and we are very excited to see what the future holds for him and we feel privileged that we get to be a part of his journey.”

“I am so lucky to have the opportunity to work with some of the young up and coming drivers in the racing industry, commented Jimmy D Smith. “ I try to give them a good foundation to develop the skills they need to continue to move up the ranks. I am very excited to work with Michael, with his dedication to learn I believe we will work very well together.”

DuroByte Motorsports will campaign Howe Racing Chassis Ford’s again in 2017 with Ford engines by Ilmor. The team will have sponsorship from Made In Detroit, Dalton Industries, Ilmor Engineering, and Nalett Trucking.

Special from RTR Motorsports - SELLERSBURG, IN - Whether he was racing four-wheelers on a makeshift track in the family’s... read more

For the sixth straight year, voting for the Champion Racing Association (CRA) powered by JEGS Most Popular Driver Awards will... read more