Salem, IN (February 8, 2017) – Two Time ARCA/CRA Super Series Powered by JEGS Champion Travis Braden has announced that he will be competing with the ARCA Racing Series Presented by Menards in the Lucas Oil Complete Engine Treatment 200 at Daytona International Speedway on Saturday, February 18. The event will be broadcasted live on Fox Sports 1 beginning at 4pm on the 18th. Braden competed in the ARCA open test at Daytona on January 13th and 14th with successful practice runs, including getting some experience at drafting on the legendary Super Speedway.

Braden is able to race in the Daytona ARCA event thanks to the additional sponsorship help for the event from The Highlands and Quaker Steak and Lube of Wheeling, WV. He also will be receiving sponsorship help from West Virginia University, Platinum Express Inc., Stony Hollow Tire, Kolb & Son Excavating, Sudsy’s Auto Spa, AD Baker Homes Inc., Matheson Gas and Eagle Aerie 1891. 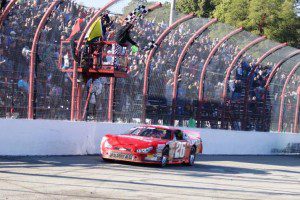 Braden ended 2016 with some of the highlights of his life and in racing, he won the prestigious Winchester 400 on the High Banks of Winchester Speedway in October, then graduated with Bachelor of Science degrees in Mechanical Engineering and Aerospace Engineering from West Virginia University in December.

Braden made headlines when he won his first ever ARCA Racing Series event he raced in, on July 24, 2015 at Lucas Oil Raceway. He also finished second in the series event at Kentucky Speedway that same season. Braden also went to victory lane in 2016 twice with the JEGS/CRA All-Stars Tour, winning the Bud St. Amant Memorial 125 at Spitzer Motorsports Park and the Winchester 100 on the same weekend as the Winchester 400.

You can keep up with all Travis Barden’s racing on his Facebook Page at www.facebook.com/TravisDBraden/.