Salem, IN. (April 13, 2017) – Champion Racing Association Powered by JEGS officials have released the entry form for the “Mercy Masters of the Pro’s” 144 event that will be held once again at Lebanon I-44 Speedway, located in Lebanon, Missouri on Saturday, June 3rd, for the JEGS/CRA All-Stars Tour Presented by Chevrolet Performance. The 144 lap event will pay $8000 to win plus bonuses, making it one of the highest paying crate late model events in the country, plus the winner will be awarded a signature green jacket, similar to the one that is known for adorning the champion of golf’s Masters event. 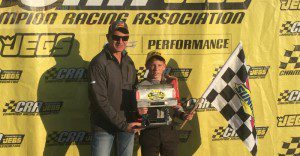 two tires. Teams will reline up for the last 44 laps based upon how they were running and how many tires they take at the break. The event could have a Non-Qualifiers Feature again, if there are more than 38 qualifiers for the event. The advanced entry deadline for this event is May 20th, entries received after that date will have to pay an additional $25 late entry fee.

Special from Speed51.com -   A Georgia racer parked a No. 26 Super Late Model in victory lane at SpeedFest Saturday evening.   No.... read more