Salem, IN (April 3, 2017) – Veteran CRA driver Terry Fisher Jr. looked like he would have to settle for a second place finish in Sunday’s Vore’s Welding CRA Late Model Sportsman Powered by JEGS 2017 season opener at Lucas Oil Raceway, as part of the 8th Annual Cabin Fever Championships, until leader Shawn Amor suffered engine problems that ended his day, giving Fisher Jr. the lead and eventually the win in the Cabin Fever Championships 40.

“We pretty much lucked into that one,” remarked Fisher Jr. in victory lane. “I really didn’t have anything for Amor, my car was really tight and I just wasn’t gaining that much on him, even when I tried to push it. I’ve lost them that way, but today we got lucky and picked up the win!” 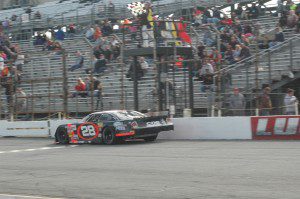 Fisher, a three time series winner in 2016, started the day off by getting the Allstar Performance Fast Qualifier Award and drew a five for the events invert putting series rookie Jason Neal on the pole, but it was Thomas Hufferd who took the early lead from his outside front row starting position at the drop of the green flag.

Amor wasted little time as he charged by Hufford to take the lead from his fourth place starting position on lap two. Fisher Jr. would follow and get to second behind Amor as the two pulled away from the rest of the field. Amor looked to be on his way to pick up the win, when he slowed with engine problems on lap 35 creating the only caution in the event.

The next series event will at Baer Field Motorsports Park on Sunday, April 29th. More information on all the CRA Series is available at www.cra-racing.com.