Salem, IN (May 8, 2017) – Johnny VanDoorn finally got back to victory lane on Sunday in the Koorsen Fire & Security 125 with the ARCA/CRA Super Series Powered by JEGS at the tight quarter mile at Anderson Speedway, but had to use his front bumper to get around Eddie Van Meter to get the win, his 19th series win placing him fourth on the series all-time victory list.

“It’s great to finally get back into victory lane,” remarked VanDoorn. “This place is really tight and it’s hard to pass. The outside was just not working today. I obviously had the faster car and I just felt like I raced Eddie like he raced me, I did what I needed to do to get by him and get the win, it was just tough short track racing.”

The three time series Champion has not raced as much recently since starting his racing business, but had not been able to win a race with the series since July of 2014 when he won the Battle at Berlin 251.

Van Meter took full advantage of his pole starting position and grabbed the early lead and looked to have the car to beat, fighting off all challengers over eight restarts including the last one with only 20 laps to go. VanDoorn, like most of the field, made an early pit stop for some adjustments, then fought back through the field to battle Van Meter the last half of the race. There was contact between VanDoorn and Van Meter on a couple of restarts as the two fought hard for the lead. VanDoorn got into the back of Van Meter in turn’s one and two on lap 123 to get by and go on to get the win.

VanDoorn collected the $5000 first place winnings, plus picked up an extra $1000 bonus for getting the Team Construction Clean Sweep Award after being the EDCO Welding Fast Qualifier. The Clean Sweep Award had not been won since September of last year.

With the win, VanDoorn became the second driver to be locked into the new Chase Championship format if he competes in at least 75% of the races leading up to the final four Chase events. VanDoorn also earned a Road to Bristol guaranteed starting position for the U.S. Nationals at Bristol Motor Speedway 100 lap Super Late Model feature.

Van Meter did a great job holding on to his car after the bump from VanDoorn, he lost a couple of positions, but immediately fought back to get by a couple of cars to get a second place finish and earn the AR Bodies Cool Move of the Race Award.

Josh Brock fought back from being in a lap 25 accident to get a third place finish. Brock earned his third straight Senneker Performance Rookie of the Race Award and was awarded the Sweet Manufacturing Sweet Move of the Race Award for his great recovery and finish.

Brett Robinson battled throughout the event to stay in the top five and came home with a fourth place finish earning the FLUIDYNE High Performance Cool Under Pressure Award. Rookie Hunter Jack also recovered from an early on track incident to get a hard fought fifth place finish. Jack had to pit several times during the event for his crew to make repairs, which they did. Jack’s pit crew’s hard work earned them the PitBoxes.com Pit Crew of The Race Award. 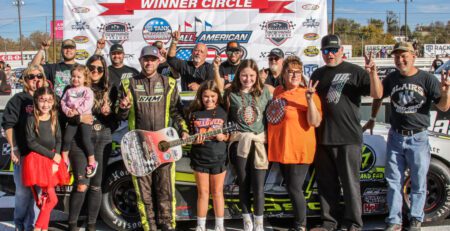