Austin Kunert Racing Story – (June 23, 2017) – After finishing second in 2016 JEGS/CRA All-Stars Tour Presented by Chevrolet Performance points and coming off a series high second place finish in the 2016 Season Championship event at Winchester Speedway, 17 year old Austin Kunert has some pretty high expectations for the 2017 season with his Lorz Motorsports Team, and so far after two series events, Kunert has met those expectations and expects more as the 2017 season unfolds.

Kunert and the Lorz Motorsprots Team started its 2017 season off with the Short Track U. S. Nationals at Bristol Motor Speedway on May 21st competing against some of the best racers from around the country at the track deemed The Last Great Colosseum, after the season opener at Baer Field Motorsports Park was postponed until July 22 because of weather. Kunert’s first job was to qualify in for the A Main, which he did qualifying 20th out of the 46 cars that took times. Kunert patiently worked his way through the field, avoiding the numerous on track incidents during the first half of the event to put himself into a great position for the second half of the race. Kunert used his past experience at high banked tracks like Winchester and Salem Speedway to come home with a fourth place finish at Bristol, his second straight top five finish in a JEGS/CRA All-Stars Tour event counting last year’s season ending run at Winchester.

The team then had to wait until this past Saturday for the series second event of the season at Salem Speedway, after the Master of the Pros 144 at Lebanon I-44 Speedway was postponed until July 3rd because of a forecast of rain. Kunert was immediately one of the fastest cars in practice, once again showing his strength on High Banked race tracks. Kunert then posted a second in Fury Race Cars Qualifying to Fast Qualifier Jack Dossey III, Kunert’s best ever performance in qualifying with the series.

Kunert would start the race in sixth place after the invert and patiently worked his way to the front as the Salem High Banks took its toll on several competitors. Several late event cautions bunched up the field giving fans an awesome show as the top five all battled for positions including Kunert all the way to the checkered flag were Kunert found himself in third place, continuing his string of top five finishes with the series to three straight. 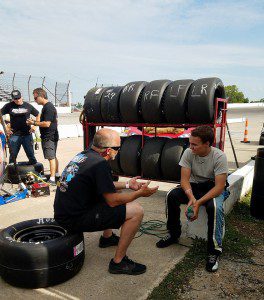 “The season has really started out well for us,” remarked Kunert. “I love the high banked tracks and I think it has showed in our last three finishes. The team has been working really hard and given me good cars. Josh Nelms and myself have been communicating great, we’ve been making the right adjustments. I have to thank the whole team for their hard work and I want to thank VanDoorn Racing Development, their shocks and set up help have been a huge part of our recent success!”

With his third place finish, Kunert is tied for second in JEGS/CRA All-Stars Tour points with Jack Smith, only one point behind series point’s leader Dossey III.

“Austin has shown what it takes to get to the next level,” remarked Driver Coach/Spotter Josh Nelms, “I wish I had his talent at that age!”

“What an awesome weekend for Austin and Josh and the Lorz Motorsports team,” remarked Mike Lorz, owner of Lorz Motorsports. “Austin qualified 2nd,  which is something we preached about is to qualify up front to get bonus points plus we stay up front, it takes a lot to come from the back in these races  because the crate cars are so tight that it’s hard to pass. Austin has been tough on the high banks the last three races, he has really grown as a driver the last three years and he is ready to win! This team really works hard, Mike and Lonnie Kunert give the team and Austin the best equipment to work with and you can see the hard work is paying off.”

The next event on the schedule for Kunert and the Lorz Motorsports Team is the Masters of the Pro’s 144 at Lebanon I-44 Speedway on Monday, July 3rd as the team continues their pursuit of their first series win and the 2017 series Points Championship. Past winners of that event include Monster Energy NASCAR Cup Series competitor Chase Elliott who won the inaugural Mercy Masters of the Pro’s 144 in 2013 and NASCAR Camping World Truck Series competitor John Hunter Nemechek, who won both the 2015 and 2016 events.

Second Annual North-South Shootout Set For Sunday, June 3   SALEM, IN, May 25 - Bragging rights will once again be on... read more