Salem, IN (July 11, 2017) – The Lawrence Towing CRA Street Stocks Powered by JEGS will be back in action this Saturday at Kentucky Motor Speedway located in Whitesville, KY. Saturday’s Fischer’s Keystop 200 will be the third event of the 2017 Lawrence Towing CRA Street Stock Four Crown Series, that will feature four 200 lap, $3000 minimum to win events. The first Four Crown event was on April 15th at Shadybowl Speedway where Chuck Barnes Jr. came away with the win. The second Four Crown event was on June 17th at Anderson Speedway were Brett Hudson got the win. The Four Crown Series Championship event will be at Winchester Speedway on Saturday, August 5th and will feature an increased purse.

Each Four Crown event winner and the overall Champion will receive a specially designed buckle from Crumrine Buckle Manufacturing. Saturday’s Four Crown Series event will be 4 tire race with a break at lap 100 to add fuel and make adjustments.

Saturday’s event will be the seventh point’s event of the season for the CRA Street Stocks. Barnes Jr. has won three of the first six events, besides his win at Shadybowl he also got wins in the Cabin Fever event on April 2nd at Lucas Oil Raceway and in the EDCO 50 at the Short Track U.S. Nationals at Bristol Motor Speedway on May 20th. Hudson has two straight series wins including the series event at Salem Speedway on June 4th and the Anderson win on June 17th. Josh Poore got the win at the series first Anderson Speedway event on May 7th.

With their victories Hudson, Barnes Jr. and Poore are the first three drivers locked into the new CRA Chase Championship format, if they compete in at least 75% of the races leading up to the final four Chase events, to crown the 2017 series Champion.

There is an open practice on Friday at Kentucky Motor Speedway, pits open at 5pm (Central Time) with open practice going from 6pm until dark. Pit Gates open on Saturday at 2pm. Practice is set to begin at 3:30pm for the CRA Street Stocks, who will have two 30 minute practice sessions. Qualifying is set to begin at 6:15pm. The race program will begin at 7pm and will include the Fischer’s Keystop 200 for the Lawrence Towing CRA Street Stocks. Also in action will be the KMS Mini Stocks, Street Stocks and Scrappers with a Fireworks Show after the races.

On Saturday, Fischer’s Keystop will have Fan Appreciation Day at their location not far from the race track at 4010 Highway 144 in Owensboro from 11am until 1pm. Racers are welcome to bring their racecars and put them on display. There will be free hot dogs and hamburgers and drinks and a local radio station will be broadcasting live from that location. Fischer’s Keystop has put up some extra bonus money up for Saturday’s Fischer’s Keystop 200, they will pay out a $50 cash bonuses to the fifth, 10th and 15th place finishers along with another $50 bonus for a Hard Luck Award.

More event and track information is available at www.kentuckymotorspeedway.us. 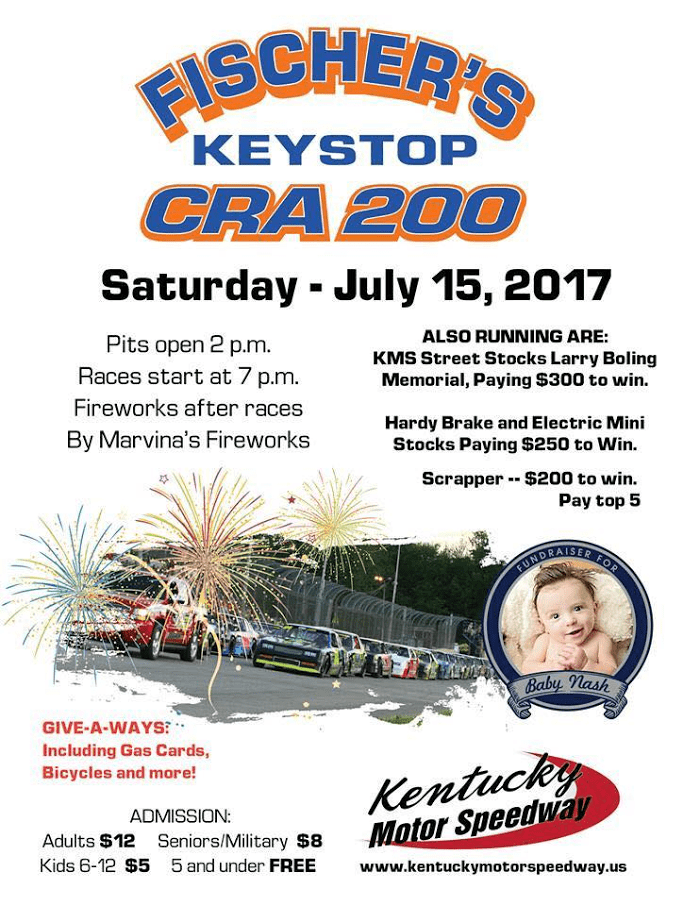