alem, IN. (August 2, 2017) – The JEGS/CRA All-Stars Tour Presented by Chevrolet Performance will return to action this Saturday at Auto City Speedway located in Clio, Michigan. Past series winners at Auto City Speedway include NASCAR Xfinity Series driver Daniel Hemric in 2012, Robbie Johnson in 2013, Eric Lee in 2014 and Dalton Armstrong in 2015. The 2016 series event was canceled because of weather.

Saturday’s Auto City 100 will be the sixth race of the season for the crate late model series sanctioned by Champion Racing Association. Cole Williams won the series season opener on May 21st at Bristol Motor Speedway and the “Masters of the Pro’s” 144 at Lebanon I-44 Speedway on July 3rd. Jack Smith won the series second event of the season on June 17th at Salem Speedway. Rookie Carson Hocevar won on July 9th at Kil-Kare Raceway, becoming the youngest winner ever with the series. Michigan veteran racer Brian Campbell won the series last event on July 15th at Berlin Raceway. The series last scheduled event at Baer Field Motorsports Park on July 22nd was canceled because of rain.

With their wins Hocevar and Smith are the first drivers to be locked into the new Chase Championship format if they compete in at least 75% of the races leading up to the final four Chase events. There are only two series events left until the first event of the Chase to crown the 2017 series Champion.

With his second place finish last on July 15th at Berlin Raceway, Carson Hocevar has taken over the series Championship points lead. Hocevar is also leading the Howie Lettow Rookie of the Year Award Presented by VanDoorn Racing Development points. Jack Dossey III is in second place in Championship points, he is 12 points behind Hocevar. The Berlin Raceway 11th place finish for Dossey III was his first finish outside the top five so far this season.

There is an open practice scheduled for Friday, pit gates open at 3pm, practice will run from 4pm until 8pm. Pit gates open on Saturday at 1:30pm, with a one hour practice session for the JEGS/CRA All-Stars Tour starting at 4pm. Fury Race Cars qualifying for the Auto City 100 will start at 6:15pm. The race program will begin at 7 pm, also racing that night will be the Auto City Pure Stocks and Figure 8’s plus MRC Dwarfs. There will be an autograph session with the JEGS/CRA All-Stars Tour drivers prior to their feature, which will take place after driver intros.

More information on Auto City Speedway is available at www.autocityspeedway.com. 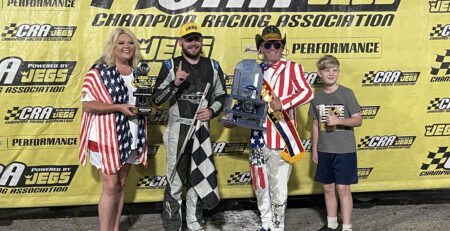 Indianapolis, IN (January 6, 2018) – The 2017 Champion Racing Association Powered by JEGS Awards Banquet, which was presented by... read more

Huntersville, N.C. (September 8, 2015) - What started out as a promising weekend for Corey Deuser, ended in disappointment. The... read more

Voting remains open until This Sunday, December 20th on Speed51.com for the fans of Champion Racing Association (CRA) Powered by JEGS... read more