2017 was the first season the CRA has used a Championship Chase format to crown their Champions in all four of its series. Five drivers were locked into the final four ARCA/CRA Super Series Champion Chase events. After three of those events, one driver was eliminated, giving four drivers a shot to win the 2017 series Championship. The four include Johnny VanDoorn, Dalton Armstrong, Logan Runyon and Wes Griffith Jr., the driver finishing the highest in Sunday’s Winchester 400 will be crowned the 2017 Champion. 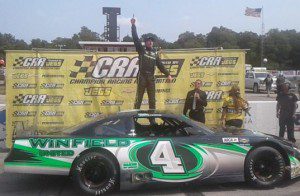 Championship. Armstrong was the series 2016 Senneker Performance Rookie of the Year and was the 2015 JEGS/CRA All-Stars Tour Drivers Champion. Armstrong locked himself into the final four with a victory at Winchester Speedway on Labor Day Weekend. Armstrong looks to also win his first Winchester 400, and has high hopes after having a dominating car on Labor Day.

Senneker Performance Rookie of the Year candidate Runyon looks to try and become the fourth driver to win both the rookie of the year and series Championship in the same season, joining the likes of Hantz, Derrick Griffin and Grant Quinlan. Runyon is currently tied with rookie Hunter Jack for the lead in the Senneker Performance Rookie of the Year standings. Jack was the Chase driver that was eliminated from the final four after Toledo, but still looks to battle Runyon for the top Rookie honors at Winchester Sunday.

The Winchester 400 is 400 laps counting cautions and is a 12 tire race. For the first time ever the event will feature Controlled Cautions in an effort to save teams the cost of bringing in professional pit crews.  When a yellow comes out teams will have two laps to service their race car without losing laps or positions on pit road. Those cars will then line up behind the cars that did not pit at that yellow. Teams not getting out of the pits in the two laps will have to fall to the tail of the field and will risk losing laps. As in the past, teams will only be allowed to change a max of two tires per yellow.

The Winchester 400 will now pay $16,000 to win plus bonuses, which includes $10,000 in lap leader money, which is $25 per lap led. There will be bonuses of $1000, $600 and $400 to the top three finishing traveling non-regular CRA teams.  There is a $1000 bonus to the highest finishing Crate Engine car and another $1000 to the highest finishing driver who has never raced in the Winchester 400 before. In addition EDCO Welding will pay a $400 bonus to the events Fast Qualifier and Hamner Racing Engines will pay a $200 bonus to the driver who advances the most positions.

On Sunday, October 8th the pits will open at 9am. There will be an on track autograph session with all the Winchester 400 drivers starting at 12:30. Opening ceremonies will begin at 1:30 pm with the 46th Annual Winchester 400 taking the green flag at 2pm.