Salem, IN (June 4, 2018) – Austin Kunert had showed he was going to have a good 2018 season when he finished second on May 5th at Anderson Speedway to first time series winner Josh Brock, his best ever series finish, but Kunert one upped that finish Saturday night with his first ever ARCA/CRA Super Series Powered by JEGS win in the Gem City 125 at Kil-Kare Raceway. The Senneker Performance Rookie of the Year candidate put on a show coming from his seventh place starting position to get the win.

“I started seventh, which was deeper than I liked,” remarked Kunert in victory lane.  “But this car was hooked up.  I was able to stick it right on the bottom to get underneath guys to make passes, but it was alos good on top. It was a really good race.  I knew had to get a good jump on Justin Alsip on that last restart, because I knew how good he is here.  I just kept rolling, trying not to use up my tires.  If he would start to get close, I would start to pick it up a little bit.”

Series points leader Brock grabbed the early lead from his pole starting position after EDCO Welding Fast Qualifier Justin Alsip drew a nine for the events inverted start.  Brock held the lead for two laps before Hunter Jack used the outside to get the lead on lap three as the two raced side by side for several laps. Brock would lead lap nine, but Jack would go back in front on lap 10. Brock would battle back and grab the lead again on lap 33.

While Jack and Brock battled up front, Kunert worked his way to the front from his seventh starting position to second behind the leader Brock. Kunert would work his way under Brock to grab the lead on lap 62, his first ever lap led with the series. Kunert would then have to hold off multi-time Kil-Kare Track Champion Alsip, including a lap 100 restart to get the win. Kunert picked up the AR Bodies Cool Move of the Race Award for his lap 62 pass for the lead and the Senneker Performance Rookie of the Race Award.

Kunert added, “I raced here last year with the JEGS/CRA All-Stars Tour and didn’t do very well, this was definitely not one of my favorite tracks, but that may have to change now. I have to thank the Lorz Motorsports Team for all their hard work and giving me a great car. My spotter and driver coach Josh Nelms, he helped guide me to victory. I also have to thank my Mom and Dad for giving me this great opportunity!”

Kunert joins Brock as the only drivers so far locked into the Chase Championship format if they compete in at least 70% of the races leading up to the final four Chase events.

Alsip would come in second, his best ever series finish, earning a Hoosier Racing Tire Performance Award, as well as the Hamner Racing Engines Hardcharger Award and the Racing Electronics Hardcharger Award. Kyle Crump battled hard at the end to get a third place finish and earned the FLUIDYNE High Performance Cool Under Pressure Award. Local driver Chad Pendleton finished in fourth place, coming back from the rear after being involved in an early caution. Former ASA Nation Tour competitor Robbie Pyle came from his tenth place starting position to finish in fifth place. 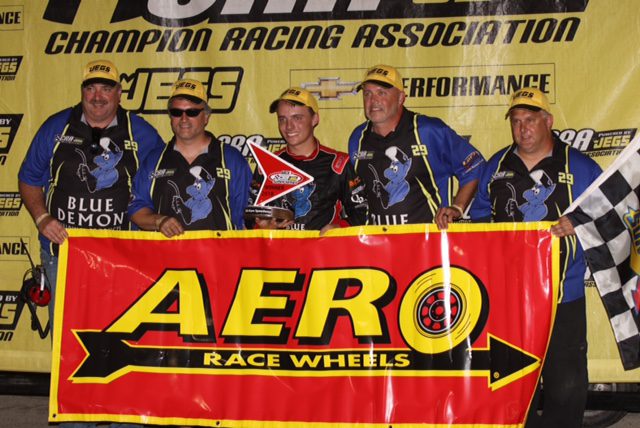