As a result of the inversion drawn by Allstar Performance Fast Qualifier Tony Dager, Marcum started on the front row in the pole position along side Dustin Burge. Eddie Van Meter and Dager lined up on the second row.

Marcum got the jump on the start with Van Meter moving into the second spot with an inside pass of Burge on the front straight before two circuits were completed. For the next 98 laps Van Meter would look for a way to get around Marcum to take the lead.

Marcum was able to maintain the lead through three restarts with Van Meter able to keep pace on the outside for several laps before dropping back into the second spot.

There were several times when Van Meter could get right on the rear bumper of Marcum’s car but was never able to complete the pass.

Marcum went on to win by 1.1 seconds over Van Meter, picking up the $2,000 first place payoff and the classic rifle trophy presented by event sponsors Motion Motors and PGG. Marcum picked up the AR Bodies Cool Move of the Race award for keeping Van Meter behind him on the three restarts.

It was Marcum’s sixth consecutive win on the high banked quarter-mile oval.

“I’ve waited a long time for a CRA win here at Anderson,” Marcum said in the Star Financial Victory Lane. “The CRA drivers are among the best and the competition is intense. Eddie (Van Meter) was able to race me hard on the outside for a couple of laps following the restarts, but we were getting a little bit better grip off the corner.”

Van Meter finished in second. Van Meter said when racing at Anderson, Marcum is the driver to beat in recent years.

“It can be tough to pass here in the high groove,” Van Meter said. “I just couldn’t get enough bite off the corner.”

JP. Crabtree finished in third on the track, but was disqualified to last place after failing post-race tech inspection.

Local driver Ronnie Rose finished in third place. Michigan racer Brandon Varney came from his eighth place starting position to finish in fourth and picked up the Racer Parts Wholesale Sweet Move of the Race Award for his passes to get a top five finish.

Tony Brutti came from his 18th place starting to finish in fifth after having issues and not being able to qualify, plus having to go to the tail after an on track incident with Tony Brunke on lap five. Brutti picked up the Spillers Towing Hardcharger Award for his efforts and the Racing Electronics Hardcharger Award.

The Vore’s Welding CRA Late Model Sportsman will return to Anderson Speedway for their next event on Saturday, July 28th, a 75 lap regular event that was rescheduled from April because of weather. Information on all the CRA Series is available at www.cra-racing.com.

(November 28, 2022) – Track Enterprises has announced that it will once again promote the long-standing prestigious pre-season SpeedFest event... read more 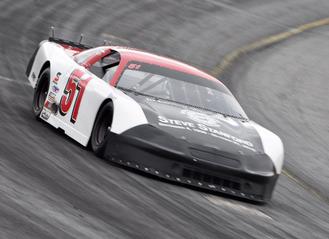