“It always feels good to get a win here at Baer Field,” remarked Cook in victory lane. “We’ve had a great car all season thanks to my crew and car owner, without them I wouldn’t be here winning races. This was a good win tonight against a strong field of cars!”

Austin Coe took the lead at the drop of the green flag from his outside pole starting position after Allstar Performance Fast Qualifier Tony Dager, who set a new track record in qualifying, drew an eight for the events inverted start. Pole sitter Justin King fought back to grab the lead on lap two, racing side by side with Coe. King was able to pull away from Coe on lap three.

Meanwhile Cook was battling his way through the field from his seventh place starting position when King tangled with a slower car on lap 10, both cars spun, but kept going not causing a yellow. Cook drove around both cars to grab the lead on lap 11. The events first caution flew a few laps later when Dave Duncan’s car erupted in flames.

Cook fought off Coe to keep the lead on the next restart. Cook’s win didn’t come easy, Cook was able to fight of all challengers on each restart including Fisher Jr. who had gotten around Coe for second, as the event was slowed by five total cautions. Fisher Jr. tried to close on Cook, but Cook was too strong and took the victory in the series Triple Crown Series Championship event over Fisher Jr. Cook collected the $2,000 first place money and picked up the Racer Parts Wholesale Sweet Move of the Race Award for his pass for the lead on lap 11.

2007 series Champion Billy Hutson finished in fourth as he looks to try and win his second series Championship in 2018. Series points leader Chris Shannon came from his 11th place starting position to finish in fifth and keep his points lead.

Coe would finish in sixth place. Brandon Varney worked his way from his 16th place to get a seventh place finish and earned the AR Bodies Cool Move of the Race Award. Dager finished in eighth. 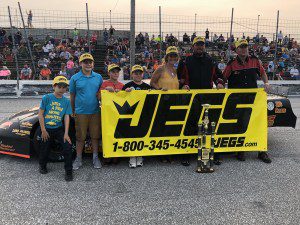 Jeff Marcum’s had his series winning streak end at three races, but with his ninth place finish, he is the inaugural Triple Crown Series points Champion, collecting the $1000 Champions payoff. There were two $500 bonuses that were given away by a random draw of all the competitors who attended all three Triple Crown events, those were won by Kent Carson and Varney.

The next Vore’s Welding CRA Late Model Sportsman event will be the first event of the Chase for the Championship at Winchester Speedway on Monday, September 3rd. That event is part of the Labor Day Weekend World Stock Car Festival.