Salem, IN. (August 21, 2018) – The JEGS/CRA All-Stars Tour Presented by Chevrolet Performance will return to action Saturday at the racy Owosso Speedway, located in Owosso, Michigan. Saturday’s event will be the sixth ever event for the series at Owosso Speedway, past winners include Erik Jones in 2011, Brian Campbell in 2012, Chad Finley in 2014, Travis Eddy in 2016 and first time winner Kyle Crump in 2017.

The series opened its 2018 season at Birch Run Speedway on April 29th were Michigan veteran Brian Campbell picked up the victory. The series second event was the Short Track U.S. Nationals at Bristol Motor Speedway on May 18th were Josh Reeves came away with the victory. Bubba Pollard won the series third event of the season, the Masters of the Pro’s 200 on June 8th at Birch Run Speedway. Cole Williams was victorious in the series event on June 16th at Salem Speedway. Campbell returned to victory lane in the series event on June 30th at Baer Field Motorsports Park. 2017 series Rookie of the Year Carson Hocevar got his first series win of the season on August 4th at Auto City Speedway. Campbell picked up his third series win of the season in the series last event on August 11th at Berlin Raceway.

The series will begin its Chase for the Championship Saturday in the Big O Classic 100 Presented by JEGS.com. The will be the second season the series has used this playoff style format to crown its Champion. The second event in the Chase will be at Winchester Speedway on September 2nd, the third event will be at Lucas Oil Raceway on September 30th, with the final Championship event on Friday, October 12th on Winchester 400 Weekend.

The drivers earning the right to compete over the next three point events to be in the final four drivers to compete for the series Championship on Winchester 400 weekend include three time 2018 winner Brian Campbell, 2017 series Champion Jack Dossey III, DGR-Crosley Rookie of the Year points leader Mason Keller, Mandy Chick, Michael Clancy Jr., rookie Tyler Hufford, and Trever McCoy. All seven Chase drivers are entered for Saturday’s event.

The Big O Classic 100 will be the Championship event of the JAS Expedited Trucking Michigan Cup, which included a mini point series with the five races scheduled in Michigan for the JEGS/CRA All-Star Tour. The program involved the season opening Dixie 100 at Birch Run Speedway, the Masters of the Pro’s at Birch Run, the Auto City Speedway event and the Berlin Raceway event.

Pits open on Saturday at 12noon. The first of two practice sessions for the JEGS/CRA All-Stars Tour will begin at 2:30pm. Lisa Thomas Salon Qualifying will take place starting at 6:15pm. The racing program will begin at 7pm. There will be an on track autograph session with all the JEGS/CRA All-Stars Tour drivers prior to the running of the Big O Classic 100 Presented by JEGS.com. Also racing on Saturday will be the Owosso Modifieds and Pure Stocks. 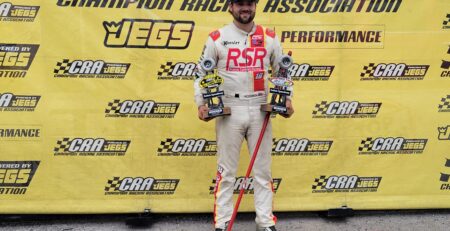