Salem, IN. (October 1, 2018) – Veteran Michigan racer Brian Campbell made CRA history on a very historical day for the JEGS/CRA All-Stars Tour Presented by Chevrolet Performance. Sunday’s Fall Brawl 100 Presented by JEGS.com at Lucas Oil Raceway was the series 100th event, Campbell passed early leader Jeff Cannon to take the lead on lap 70, from there cruised to the win, his series leading fourth win of the season and his ninth all-time series win, passing current NASCAR Xfininty Series racer Daniel Hemric, who will be racing in the Monster Energy NASCAR Cup Series in 2019, as the all-time series wins leader. Campbell won the series first ever event in April of 2011. 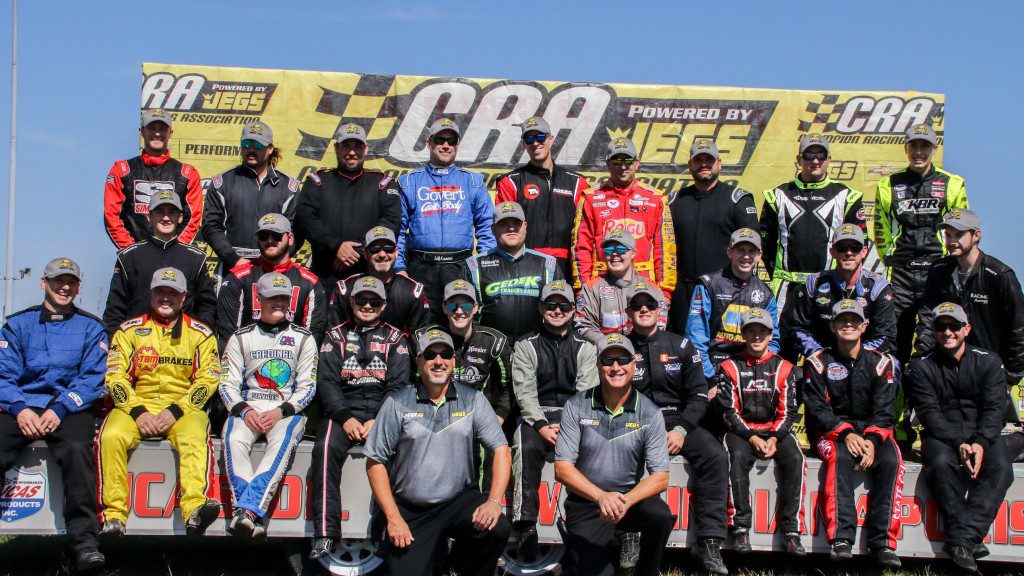 “Anytime you can pass someone like Daniel Hemric for a record, that’s something special,” Campbell remarked in victory lane.  “He’s a NASCAR driver and one of the best in the business. Anytime you can do something like that it’s pretty cool. This is the first year in a handful of years we ran more than one or two races with the JEGS Tour, but it is pretty special to solidify our name and team in the record book, that means a lot to us and hopefully I’m around for 100 more.”

2016 event winner Cannon took full advantage of his pole starting position after Lisa Thomas Salon Fast Qualifier Jack Dossey III drew an eight for the events inverted start. The top five battled hard for several laps before former ARCA/CRA Super Series Champion Chuck Barnes Jr. was able to get second and close on Cannon. Barnes Jr. applied pressure to Cannon on several occasions but could not make the pass. Campbell and 2017 series Rookie of the Year Carson Hocevar made their way into the top five, but settled in and let the laps go by.

A caution on lap 55 for debris bunched the field up and gave several cars the opportunity to get in the battled for the lead on the next restart. The yellow flag flew again on lap 64 when Evan Shotko spun on the front stretch with rear-end problems. Campbell had now moved into second place, putting him in position to make the pass on the bottom to take the lead on the lap 70 restart. From there Campbell would pull away to get the win by close to a second over Hocevar.

“It was kind of strange,” Campbell added.  “We ran for 55 laps right off the, we caught Cannon and Barnes, but we couldn’t do much with them.  I was really losing the nose getting into the corner.  I hate to say the cliché like a big track, but we were getting into the dirty air and I couldn’t maneuver the car.  Those restarts helped us get air on the nose and allow the car to turn.  Then I got out front and I knew everybody would have the same problems I had, so as long as I could maintain my line I figured I was going to be okay.”

Hocevar would finish in second and pick up the Fluidyne High Performance Cool Under Pressure Award. Two time ARCA/CRA Super Series Champion Travis Braden worked his way from close to the tail of the field to finish in third after pulling his car out of impound for adjustments. Braden picked up a Great Lake Tire/Hoosier Racing Tire Performance Award.

Mason Keller finished in ninth after starting 22nd. His team also pulled their car out of impound to make adjustments before the race, which paid off with his finish. Keller earned a Great Lake Tire/Hoosier Racing Tire Performance Award and the DGR-CROSLEY Rookie of the Race Award. With his win in the September 2nd series event at Winchester, Keller is also one of the four drivers to race for the series Championship at Winchester and is leading the DGR-CROSLEY Rookie of the Year points. For their hard work in giving Keller a much better car for the race, Keller’s crew picked up the PitBoxes.com Pit Crew of the Race Award.

The fourth and final driver to earn a shot at the 2018 series Championship was Mandy Chick. Chick had a late race battle with Chad Pendleton over the last laps of the race. Chick was able to hold off Pendleton, which gave her enough points to earn the final spot in the Championship event. Chick earned the AR Bodies Cool Move of the Race Award for holding off Pendleton to be the fourth driver in the Chase for the Championship.

Rookie Tyler Hufford was the only other Chase for the Championship driver who was trying to continue in the Chase for the Championship. Chick and Hufford actually tied in points over the two playoff Chase races, but the tie breaker was who had the best overall finish in those races and that was Chick with a sixth place finish at Winchester. Hufford and his team put in a valiant effort throughout the season trying to win the series Championship and the DGR-CROSLEY Rookie of the Year.

The next series event will be the series Season Championship event on Friday, October 12th at Winchester Speedway, part of the opening events for the Winchester 400 Weekend. More information on all the CRA Series is available at www.cra-racing.com.