Salem, IN (November 14, 2018) – 34-year-old, second-generation racer Tony Brutti from Dyer, Indiana, had a dream come true when he claimed the 2018 Vore’s Welding CRA Late Model Sportsman Powered by JEGS Championship on Saturday, October 13th on the famous High Banks of Winchester Speedway. Brutti was one of four racers competing in the Chase for the Championship that day, the Championship would go to the driver finishing the highest in that event. Brutti came away with a second place finish, tops among the four Chase for the Championship drivers in the 50 lap Season Championship event, earning his first ever CRA Championship.

“Our family has been involved in racing for over 40 years and we’ve never been able to bring home a championship before, “commented Brutti after winning his Championship.  “It’s pretty special for me and for my Dad.  He kind of talked me into the point’s racing.  The whole thing is pretty much due to him.”

Tony’s father Joe, raced in the Chicagoland area, mainly at Grundy County Speedway and the now closed Illiana Motor Speedway. He didn’t venture out to compete as much as his son Tony has, competing in a traveling series with events throughout Central Indiana. 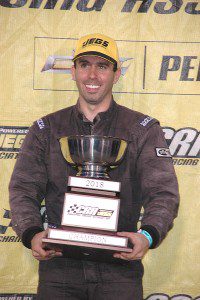 “The hardest thing is when we go to tracks where there are local cars,” Brutti added.  Places like Anderson Speedway and Baer Field Motorsports Park, they have a lot of good local racers we have to compete against at their home track. They race there every week so we’re at a little disadvantage because we don’t have the track time like the regulars. The other hard thing is getting the car right at places we go to maybe once or twice a year.  You don’t have a lot of practice time.  You don’t have a lot of time to tune the car. You need to do your homework at the shop. You have to be close setup-wise right off the trailer or as close as you can.  Sometimes, racing on a touring series, you have to make some pretty big swings in adjustments.”

Brutti won his first CRA event in 2017 at Anderson Speedway. Brutti hoped to get more wins in 2018, but that didn’t happen, but he did get three second place finishes, one at Anderson and two at Winchester, in all Brutti had seven top five finishes in the series 10 events in 2018, finishing out of the top 10 only twice.

“I need to thank my Dad, along with Joe D’Ambrose at Tech One Race Cars, Dan at Competition Engines, Jeff Cannon at FRS Shocks and Jim Smith, he went to almost all the races with us this year,” remarked Brutti. “I also have to thank my sponsors McDonald’s, Flossmoor Family Auto Repair, Frankfort Family Auto Repair, Midwest Dock Solutions and the Echlin Co, without their support we wouldn’t have won this Championship!”

Brutti will officially be crowned the 2018 Vore’s Welding CRA Late Model Sportsman Champion at the 2018 CRA Awards Banquet on January 11th, 2019 which will take place at the Crowne Plaza Indianapolis Downtown at Union Station.

Salem, IN. (April 14, 2016) – Champion Racing Association Powered by JEGS officials have released the entry form for the... read more

SCHEDULE UPDATE: King of the High Banks Sunday at Winchester