Salem, IN (February 19, 2019) – Muncie, Indiana racer Jaren Crabtree has announced he will compete with the ARCA/CRA Super Series Powered by JEGS in 2019, for the series Championship and the 2019 Senneker Performance Rookie of the Year Award, beginning with the series first points event of the season on April 6th at Anderson Speedway. 2019 will be his first full season completing with CRA, but the Crabtree name is a familiar one in past CRA seasons with dad Jim Jr. and brother J.P. 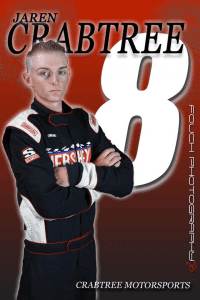 Jaren competed in a handful of Van Hoy Oil CRA Street Stock events from 2014 through the 2018 season, also making several Street Stock starts at Anderson Speedway, before purchasing a late model last fall and making his CRA late model debut on Winchester 400 weekend last October. He competed in the JEGS/CRA All-Stars Tour Season Championship event on Friday, October 12th, coming from his 21st starting position to finish eighth. On Sunday, October 14th he made his ARCA/CRA Super Series debut in the 47th Annual Winchester 400, coming from his 28th place starting position to finish in 13th.

“I’m excited for the 2019 racing season to begin,” remarked Crabtree. “I know coming into this season that I lack a lot of experience, but my goals are to make laps, be consistent and get valuable seat time. We want to try and make the Chase for the Championship and be in position to compete for the Senneker Performance Rookie of the Year Award. If we make the Chase for the Championship, then we will do our best to get into the final four to compete for the series title in the Winchester 400.”

Crabtree will have a low budget team, going race to race, relying heavily on his family and friends for support throughout the season.

Crabtree added, “Mom and Dad have always supported my racing, I couldn’t do it with out them. My fiancé Jenna is always there to support me, any way she can. My brother J.P. is a huge help with his knowledge of the cars and the tracks we will go race at. My sister Shelbie who does all the PR work for my brother and I, and my Grandma and Grandpa, who have had engines and tires for me since I started racing. Everyone who comes to the race track and dedicates their weekend to help me, people like Mike Sargent, James Butler, Eric Morrow, Wendell Layne, Chris Mefford, Joel Enochs and Derrick Layne. I couldn’t do it without the help of everyone involved.”

Salem, IN. (August 12, 2018) – Brian Campbell showed once again why he is one of the most successful drivers... read more