Salem, IN (February 5, 2019) – Champion Racing Association Powered by JEGS officials have announced that Outerwears Performance Products has agreed to continue as a marketing partner with CRA and its ARCA/CRA Super Series Powered by JEGS for the 2019 racing season, that will begin on Saturday, April 6th at Anderson Speedway. 2019 will be the 23rd season of competition for the ARCA/CRA Super Series that had its first ever event at Anderson Speedway on April 26, 1997.

The award will be based again upon the Chase format that CRA will use to determine its Champions again in 2019. The final four scheduled races will be utilized for the Chase to determine a series Champion and the Outerwears Crew Chief of the Year Award. To be eligible a team must have raced in at least 70% of the races to that point and be in the top 8 in series wins (then points). The top five eligible teams Crew Chiefs will be awarded points at each of the last four Chase events, 5 for the highest finisher, down to 1 for fifth highest. The Crew Chief earning the most points in the four Chase events will be the 2019 Outerwears Crew Chief of the Year Award winner.

“Outerwears is very excited to be a marketing partner with the ARCA/CRA Super Series again in 2019,” remarked Nick Schero with Outerwears Performance Products. “We look forward to working with all the Crew Chiefs and Crews this season and we are looking forward to continue the excitement the Chase format will produce in determining the series Champion and the Outerwears Crew Chief of the Year!”

“We really appreciate Outerwears continuing to support CRA and our ARCA/CRA Super Series,” remarked Glenn Luckett, Managing Partner with Champion Racing Association. “Many times the Crew Chiefs do not get recognized for their efforts in getting their driver on the track and for their efforts in getting good finishes in our events, this award gives those guys the recognition they deserve. We look forward to working with Outerwears and this great award program again in 2019.”

Based in Schoolcraft, Michigan, Outerwears has been on the track improving performance and creating champions since 1979. Designed using Terra-Flo technology Outerwears radiator screens provide the perfect balance between airflow and debris deflection, allowing peak airflow and longer radiator life. Outerwears radiator screens will be an important part of the ARCA/CRA Super Series for the 2019 race season. Ask your local dealer for your Outerwears or visit www.outerwears.com. 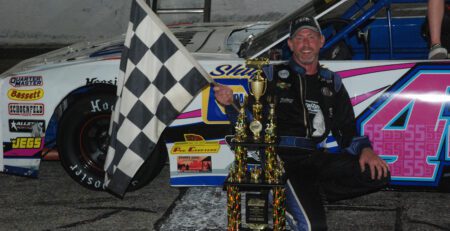