Salem, IN (February 8, 2019) – Anderson, Indiana veteran racer Greg Van Alst has announced he will be back to compete for the 2019 ARCA/CRA Super Series Powered by JEGS Championship starting on April 6th at Anderson Speedway. Van Alst returned to full time competition with CRA in 2018 with the ARCA/CRA Super Series, were he finished fifth in the Chase for the Championship. Van Alst is making some changes with his equipment for 2019 that he thinks will give him a better opportunity to claim the 2019 Championship. 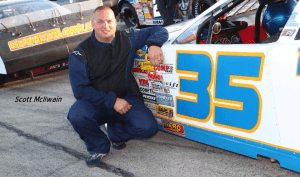 “Our expectation this year is to get back to the way we are used to running,” remarked Van Alst. “We were always contenders for race wins and championships in the Vore’s Welding CRA Late Model Sportsman series. I’m hoping last year was just a bad luck year that we can put behind us.”

Van Alst was the 2014 Vore’s Welding CRA Late Model Sportsman Champion. He picked up his first series win that season at Anderson Speedway on June 13th. Van Alst picked up a second series win also at Anderson during the 2015 season. Van Alst competed in ten of the ARCA/CRA Super Series eleven point events in 2018, with a best finish of ninth twice, first in the Redbud 400 at Anderson Speedway and at Baer Field Motorsports Park.

Van Alst added, “This will be my 22nd year of racing and will be the first time I have ever had the means to build a new racecar. We are getting a 2019 VanDoorn Racing Development Chassis. We also bought a new house back in June. It had an old pole barn out back. We have been in the process of getting it ready for the 2019 season as well. Having our shop in my backyard instead of at my business location will not only help separate our fun from business but allow me to help grow the next generation of racers. Two of my four kids, Ryder and Cadence, race quarter midgets. The shop move makes it easier for the kids to be hands on with their own cars.”

Van Alst will work closely with Johnny and Butch VanDoorn at VanDoorn Racing Development in 2019. Van Alst will use McGunegill Engine Performance power under the hood in 2019.

From Toledo Speedway - Toledo, Ohio—August 31, 2020: Central Transport will return as the title sponsor of the 2020 Glass... read more