Salem, IN (March 18, 2019) – Officials from Champion Racing Association Powered by JEGS have announced that Schoenfeld Headers as agreed to continue to be a marketing partner with CRA and will support the racers in each CRA Series in 2019, including the ARCA/CRA Super Series Powered by JEGS, the JEGS/CRA All-Stars Tour Presented by Chevrolet Performance, the Vore’s Welding CRA Late Model Sportsman Powered by JEGS , the Van Hoy Oil CRA Street Stocks Powered by JEGS and the new for 2019 Victory Custom Trailers CRA Junior Late Models.

“We greatly appreciate Schoenfeld Headers coming back on board to support all five CRA Series in 2019,” remarked Glenn Luckett, Managing Partner of Champion Racing Association. “It has always been a pleasure to work with everyone at Schoenfeld Headers, they have a great product that has proven itself in all forms of racing!”

Schoenfeld Headers will award the second-place finisher at each Victory Custom Trailers CRA Junior Late Models event with $75 Product Certificate and a $100 Product Certificate to the driver advancing the most positions in the series Season Championship event at Fairgrounds Speedway Nashville on November 2nd.

In addition, Schoenfeld Headers will award a set of headers by random draw of the top 10 in final points for the top four CRA series at the 2019 CRA Awards Banquet. The will also award a complete header and exhaust kit by random draw of the top ten in final points with the Victory Custom Trailers CRA Junior Late Models at their 2019 Awards Banquet.

Founded in 1974 by Don Schoenfeld, which it is still a family owned business, Schoenfeld Headers is the world’s largest manufacturer of circle-track headers, they specialize in a variety of high-quality exhaust parts, including turn-downs, extensions, tubing bends and elbows, race mufflers, insert mufflers, mandrel bends, exhaust reducers, header gaskets, and more.

Schoenfeld Headers is based in Van Buren, Arkansas. They truly make exhaust applications for anything with an engine. From mini sprints to sprint cars, midgets and late models, dirt or asphalt, all the way up through the world of truck and tractor pulling and marine as well. Schoenfeld has a system for your needs, including muscle cars. Schoenfeld Headers also has state of the art CNC bending and welding equipment, as well as a state-of-the-art chassis dyno facility. Additional information is available at www.schoenfeldheaders.com.

Race Results: Money in the Bank 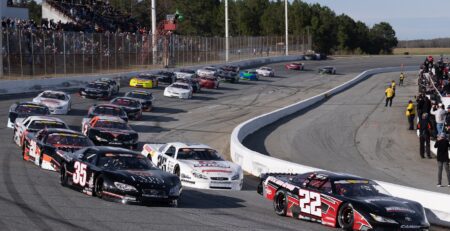