Salem, IN (April 16, 2019) – The ARCA/CRA Super Series Powered by JEGS will head to Toledo Speedway, located in Toledo, Ohio, for this weekend’s Ross Mortgage 200 Presented by PNC Bank event, which will also include racing action from the ARCA Gold Cup Outlaw Late Models. Saturday’s series event will be the second event of the 23rd season of competition for the ARCA/CRA Super Series, which opened its 2019 season at Anderson Speedway on April 6th. 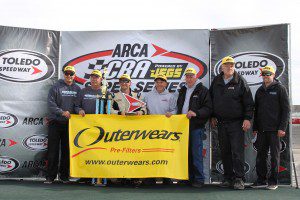 Also entered is 2013 event winner Johnny VanDoorn, who scored one series victory during the 2018 season at Kalamazoo Speedway. VanDoorn is tied with Brian Ross for third in all-time series victories with 22.

Two time series Champion and current ARCA Menards Series competitor Travis Braden is entered for Saturday’s race. Braden is currently tied for seventh in series all time wins with 10. Braden is the series current points leader after finishing second in the series season opener at Anderson and was the Hamke Race Cars/Rowdy Manufacturing Fast Qualifier.

Jack Dossey III is entered for his first ever race at Toledo Speedway. Dossey III started his season off with his first ever series victory at Anderson over Braden and comes in second in Championship points and leading the Senneker Performance Rookie of the Year points.

2016 series Champion and former series event winner at Toledo Speedway Cody Coughlin is entered. Coughlin competed with the NASCAR Truck Series from 2016 through the 2018 season but is now back racing late models.

There are three Canadians entered for Saturday nights event including Cayden Lapcevich who was the 2016 NASCAR Pinty Series Champion. The other Canadians entered include former JEGS/CRA All-Stars Tour competitor Brandon Watson and veteran racer Jerry Artuso.

Former Toledo Outlaw Late Model and ARCA Menards Series competitor Michael Simko is entered to race Saturday night. Simko competed in a handful of series events in 2018 including a third-place finish in the Glass City 200 event at Toledo Speedway.

There will be optional rig parking on Friday evening from 6 to 7pm. Pit Gates open on Saturday at 8am. The ARCA/CRA Super Series will have three 30-minute practice sessions starting at 11am along with two 30 minute practice sessions for the ARCA Gold Cup Outlaw Late Models. Qualifying will begin at 2:15pm, for both groups. There will be an on track Autograph Session with all the drivers following qualifying. The Ross Mortgage 200 Presented by PNC Bank is set to begin at 4pm with the 100 lap feature for the ARCA/CRA Super Series, followed by the ARCA Gold Cup Outlaw Late Models 100 lap feature.

Additional event information can be found at www.toledospeedway.com.

Additional information on the ARCA/CRA Super Series can be found at www.cra-racing.com. You can also follow CRA on Facebook at: www.facebook.com/ChampionRacingAssociation as well as Twitter at www.twitter.com/CRAracing. 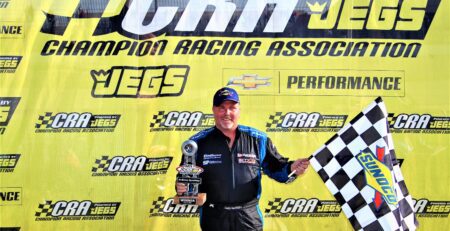 Salem, IN – November 10, 2020 – Champion Racing Association officials announced today one driver/team has been disqualified from the... read more