Salem, IN (July 13, 2019) – Salem, IN – Champion Racing Association Powered by JEGS officials announced today that the winner of the June 29th Van Hoy Oil CRA Street Stocks event at Baer Field Motorsports Park has been disqualified after forensic laboratory tests determined the team had used an illegally-altered tire during the event. The lab used by CRA for testing is the same lab used by the top racing organizations in the country, including NASCAR and the World of Outlaws.

CRA officials took samples from top three finishers at the event, sealed the samples, signed by the teams and delivered to the independent laboratory for detailed analysis. The samples were taken from the cars driven by Jake Hinton (first place), Jason Atkinson (second place) and Ryan Amonett (third place).  The Hinton sample was found to not conform to the Hoosier submitted benchmark and was analyzed in duplicate to confirm the original scan result, which is laboratory protocol. The duplicate results matched the original results, thus confirming the tire sample from the winner’s car did not meet the Hoosier submitted benchmark.

The tire samples taken from Atkinson and Amonett were found to conform to the Hoosier submitted benchmark, and thus passed testing.

As a result of these findings, the team found the with non-conforming tire has been disqualified from their finishing position and will be placed in last position in the event, receive a fine equal to half their purse and placed on probation for one calendar year. The change in the final order for the event will result in affected teams receiving additional purse and points following their next event.

Special from Speed51.com - The 47th Annual Winchester 400 came down to a late-race duel between Florida veteran Jeff Choquette... read more 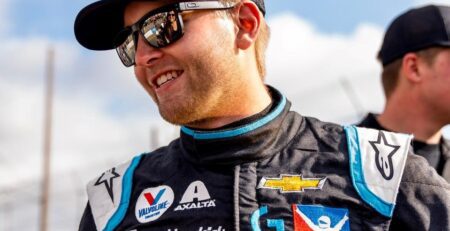