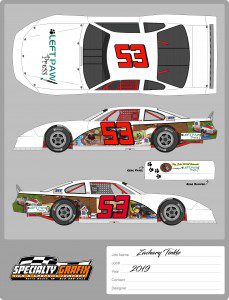 When asked about the new paint scheme, Zachary Tinkle responded, “This book has become a fan favorite. It’s about my racing, my pug Bella, and it encourages kids to read. Left Paw Press has supported me my entire career and this is a way to further promote the close relationship. I can’t wait to show off the paint scheme. Fans are going to love it!”

Specialty Grafix Sign & Graphics Company out of Terre Haute, Indiana will be installing the graphics. Their motto is “Dominating the Bull Ring.” Fans can see the paint scheme at Zachary’s Anderson Speedway and Kil-Kare Speedway races.

Bella is a happy-go-lucky pug living an everyday dog’s existence until fate intercedes. When her boy, Zachary Tinkle, starts racing a minicup stock car, the trajectory of her life changes. It starts with just taking photos of her in a car and suit that matches Zachary’s race car. Then, Bella gets to go to the racetrack by happenstance. Traveling to the race track so that she can greet fans along with garnering attention and belly rubs becomes one of her favorite things to do. Word gets out about Bella while Zachary’s racing career grows to his racing a full size late model race car. Magazines feature Bella and Zachary’s relationship. She has cameo appearances in books. And, there were hero cards featuring her and Zachary. Listen to Bella tell her story of how she has become known as the racing ‘Pit Pet Fashionista’ in this delightful book written from a pug point of view.

Salem, IN. (July 6, 2017) – The JEGS/CRA All-Stars Tour Presented by Chevrolet Performance will return to action this Sunday... read more