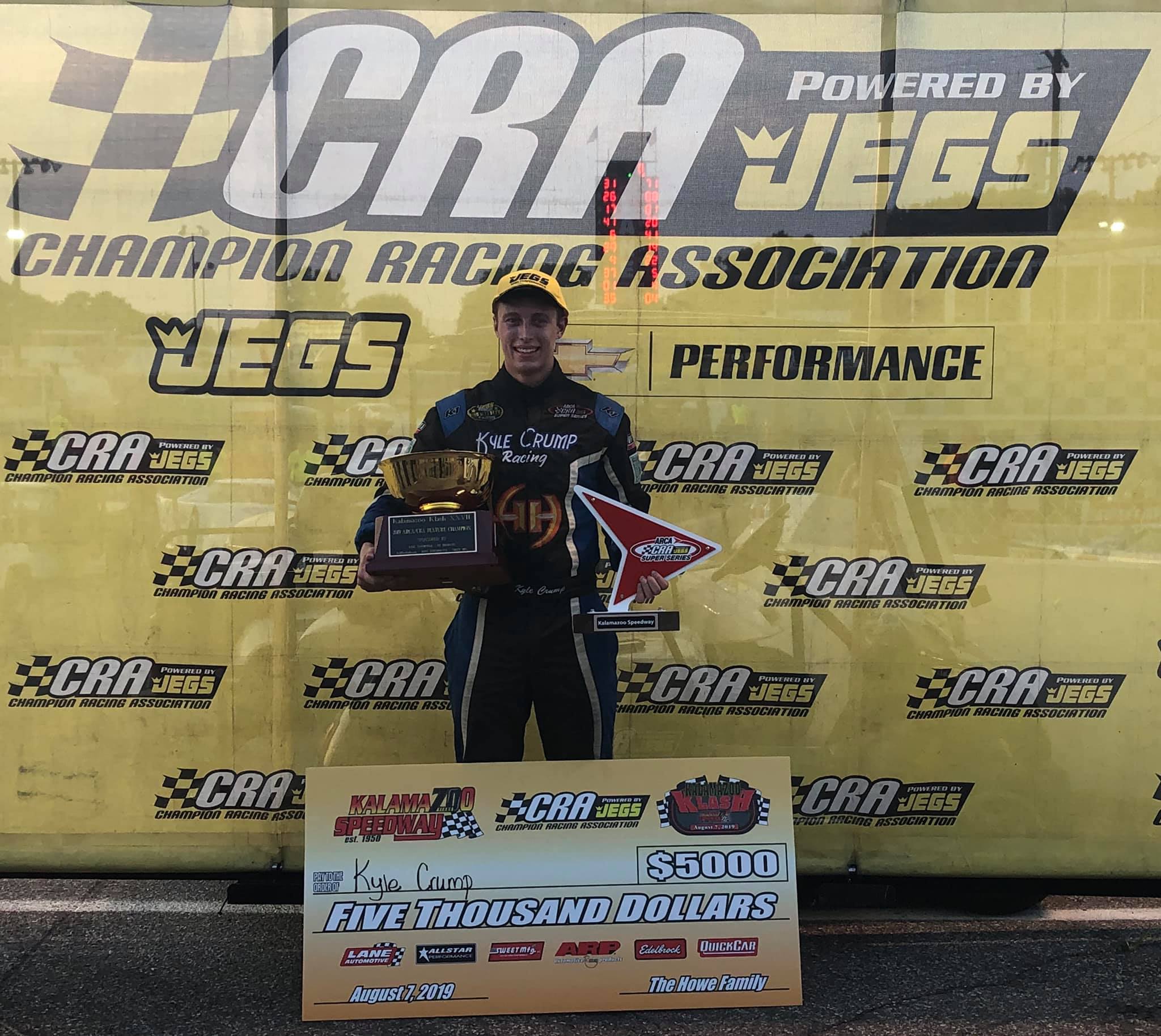 The ARCA/CRA Super Series thundered into Kalamazoo Speedway for the final race of the regular season, the Kalamazoo Klash.  At the end of the race, it was a first-time series winner standing tall in victory lane, as Kyle Crump picked up the 125-lap feature win.

Fresh off his NASCAR Gander Outdoors Truck Series debut, Carson Hocevar came into the event strong. Hocevar’s KBR Development No. 14 swept both afternoon practice sessions, and come qualifying Hocevar looked to finish the job.  It would be a nail-biting qualifying with Brian Campbell edging out Hocevar for the quickest time.

Following the field inversion, Hunter Jack and Jack Dossey, III started on the front row. In recent years, the Klash had been a very action packed and clean race. This year had start-to-finish action, and despite a very high caution count, the drivers still kept it very clean.

Johnny VanDoorn appeared almost unbeatable in his quest for back-to-back Klash victories.  However VanDoorn was one of the long list of drivers that encountered mechanical problems during the race.

When the dust settled, it was Crump motored to his first career victory in the Super Series.

“It was like 20 laps to go and I was like, Are you kidding me? I’m leading this race” Crump said in victory lane.  “And then I saw the smoke coming out of turn two and the caution came out and I was like, gosh darn it.

“Van Doorn and Braden had been so fast, I had to keep nailing the restarts every single time,” Crump added. “Those guys both raced me fair and clean, Johnny could’ve put me up the race track with the bumper at anytime but chose to race me fair and that was awesome”

Despite his best efforts to get around Crump, Wheeling, WV driver Travis Braden was happy with his second place effort. The ARCA Menards Series driver lead during the middle stint before falling back after a mid-race restart.

“It was a great day. We had a really fast car all race long” Braden said. “We really struggled this season, but we’re still to trying our hardest to win and the car is so fast. A big thank you to Platinum Motorsports because we are able do something with a very limited group with me right now these past two years, and to be able to show up and run well it’s really phenomenal.

“I just wish we could get them a win but we’re gonna have one here soon,” Braden added. “I just gotta say that was pretty much the most exciting race I’ve been in but especially those last 15-20 laps on the restarts. Man, that had to be one of the most impressive shows to watch a long time. So just thankful to be a part of it.”

“Right-front just went down after contact with Johnny or something like that. Either way I felt it was going down and just popped off,” Hocevar said. “We, by far, thought we were gonna win the race. We had the fastest car all day so it just sucks.”

The ARCA/CRA Super Series will return next week at Berlin Raceway for the Battle at Berlin 251. Stay tuned to Speed51 for more coverage details of the event.