Salem, Indiana (August 13, 2019): The Victory Custom Trailers CRA Junior Late Models will begin their 2019 Chase for the Championship this Friday, August 16th at Corrigan Oil Speedway, located in mason, Michigan. Friday’s event will be the sixth event of the inaugural 2019 season for the series sanctioned by Champion Racing Association Powered by JEGS. That event will be the first ever CRA event held at Corrigan Oil Speedway, which was known as Spartan Speedway for numerous years, and will be the first time the series has had a standalone event.

The Victory Custom Trailers CRA Junior Late Models is a new racing series in 2019 to focus on a youth movement for short track stock car racing that will see 10 to 15-year-old drivers compete amongst themselves for both experience and recognition in full size late models with an economical drive train and suspension alternatives. Friday’s race will be the sixth of eight scheduled races for the series in 2019.

Luke Wilhelm came away with the victory in the inaugural 25 lap feature for the Victory Custom Trailers CRA Junior Late Models on May 18th at Birch Run Speedway. Chase Burda has now won four straight feature events with the series, at Baer Field Motorsports Park on July 6th at the Indianapolis Speedrome on July 14th, at Baer Field again on July 27th, and won last Saturday’s event at Anderson Speedway. Burda also has four heat race wins to date and has been the MPM Marketing Fast Qualifier at all five events this season. 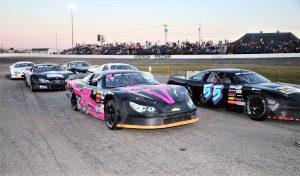 More event and track information are available at www.spartanspeedway.com.