Salem, Indiana (September 22, 2019): 14-year-old Columbviaville, Michigan native Chase Burda picked up his fifth win of the season in the Victory Custom Trailers CRA Junior Late Models Jim Hettinger Memorial 30 Saturday night as part of the Central Transport Glass City 200 event at Toledo Speedway. Unlike many of his wins this season, Burda had to fight to keep the lead on every lap, even though he led all 30 laps of the event. 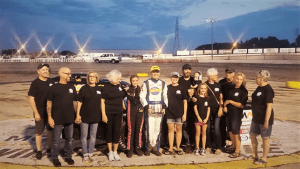 “It’s really cool to win the Jim Hettinger Memorial here tonight,” remarked Burda in victory lane. “I’ve known the family for a long time, they’ve been a part of my racing career, so it means a lot to me to get this win. This track was the smallest we’ve raced on all season and it was tough to get a round. We were all pretty much bunched together throughout the race. I got a good jump on the last restart and was able to get a little distance, that’s what got us the win.”

The Victory Custom Trailers CRA Junior Late Models is a new racing series in 2019 to focus on a youth movement for short track stock car racing that will see 10 to 15-year-old drivers compete amongst themselves for both experience and recognition in full size late models with an economical drive train and suspension alternatives. Saturday’s race was the seventh of eight scheduled events for the series in 2019.

The three-car invert for the feature placed Burda on the pole for the Jim Hettinger Memorial 30 and he took full advantage jumping to the lead at the drop of the green flag while the rest of the field jockeyed for positions. A couple of early cautions for single car spins tightened up the field and changed the running order of second through fifth each time.

Inaugural series feature winner Luke Wilhelm worked his way to second and had a faster car then Burda’s, making a nice  inside pass for the lead, but the caution flew for a spin by Evan Varney on lap 25, putting Burda back into the lead since the field had not completed a lap with Luke Wilhelm as the leader.

Burda was able to keep the lead on the lap 26 restart and but a little distance between he and Luke Wilhelm, Luke Wilhelm fought back to make a last turn dive for the lead coming to the checkered flag, but spun and made contact with Corrigan Oil Speedway series event winner Keeven as the two crossed the finish line with Keeven getting second and Luke Wilhelm third. Zack Wilhelm finished in fourth with Katelyn Hettinger, granddaughter of Jim Hettinger, in fifth place.

Luke Wilhelm picked up the AR Bodies Cool Move of the Race Award for his nice pass that was brought back because of the caution.

Burda was the series regular season points Champion and had already earned an automatic spot in the final three drivers who will race for the series Championship at Anderson Speedway next Saturday night. Keeven was a lock into the final three with his win at Corrigan Oil Speedway, the first event in the series Chase for the Championship. The third position will go to Zack Wilhelm who got the most points of the remaining Chase drivers over the first two Chase events. The driver who finishes highest of those three at the Season Championship event Saturday at Anderson will be crowned the inaugural Victory Custom Trailers CRA Junior Late Models Champion.

DRP Performance Products Extends Support of CRA for the 2017 Season